Review of "Hell" by The Headless Critic 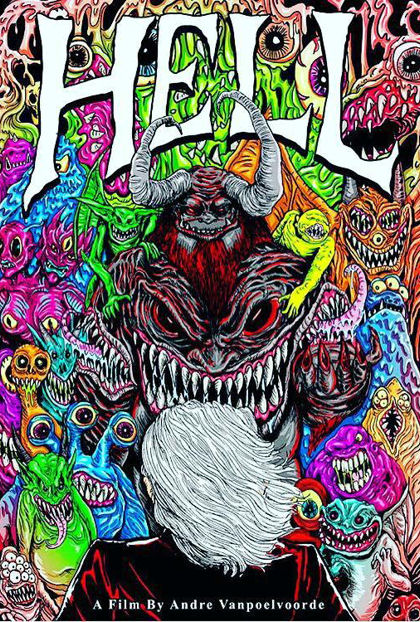 Crash (Andre Vanpoelvoorde) has hit rock bottom. He’s surpassed simply smoking the green to snorting the white and now he’s gotten so bad he’s drinking the Tussin. At rock bottom, addicted to Robitussin and ready to die, Crash just got his reason to live by accidentally opening the gates of hell. Demons come in an acid trip to Hell. Crash must come face to face and defeat Satan himself. What do you have to lose when you have nothing else to live for? We’re all going to burn in Hell.

Act 1: Phantasmagoria:
A random sequence of artfully displayed images like those seen in a dream sequence. Act one doesn’t get across a story so much as setting a base character and the overall artful tone of the film.

Act 2: Stranded on Death Row:
A twenty-five minute silent film transitions into a ten minute, professional wrestling fight scene as Crash wrestles his way to fight for his life.

Act III: The Great American Nightmare
Hell on earth, through an amusement park, across state lines and ending in the ultimate battle deep in the nightmare woods of Hell.

Hell is a no budget, horror themed film from the long ago decapitated Andre “Astro Creep” Vanpoelvoorde in his directorial, writing and acting feature debut. It’s a mind meld of clipped images that play out in The Ring form for early day MTV videos back when MTV still showed music videos. Artfully shot in Hell with a classic score, Hell has the inspirational vibe of an inspiring youthful filmmaker. Andre’s scenes of Claymation are excellent. I also enjoy the Robot Chicken style toy animations. The film as a whole struggles to find its identity. An outside editor making the tough cuts on the editing room floor without emotional attachments could have really helped the film's flow.

Forty-five Minutes until the star of the movie really speaks is something that’s difficult for even the most experienced director or actor to make entertaining for a modern day audience as Robert Zemeckis and Tom Hanks can attest to. Vanpoelvoorde uses colors and acid trip randomness to get from the start to the finish of this crazy walk through Hell. It’s film school at work on screen. While the decapitated critics may not be high for this film off production values alone, the passion behind this project can be seen just as easily as its production values. It would be nice to see what Andre Vanpoelvoorde can do with an actual budget, a full crew and using a full, well written script. Perhaps in Claymation form which is the hottest coal in this Helluva movie. I also have to say, that’s one Hell of a cover.