Review of "American Animal" by The Headless Critic 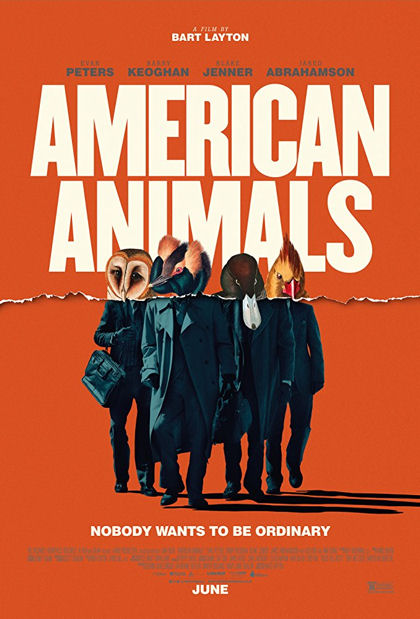 “Nobody wants to be ordinary”, something most college students realize before conforming to the societal standards of adulthood. The greatest artists and enthusiasm comes before we reach full maturity. So does the greatest stupidity. In 2004 four students at Kentucky’s Transylvania University, commit one of the most audacious heists in U.S. history. “The perfect heist is a work of fiction” but this is a true story and there was nothing perfect about this heist. “You don’t know where the line is until you cross it” and if you do, you’ll never be the same.

Documentary filmmaker Bart Layton seamlessly blends the lines of reality into entertainment in this part documentary, mostly scripted feature. If you want to make your true story into a feature film, hiring someone who makes documentaries works well. Layton, slips back and forth between the men who committed these crimes and the actors portraying them. At times the character brilliantly interacts with the person he’s based off of. In a movie world of “Inspired by a True Story”, these American Animals are as real as Hollywood gets.

Evan Peters tackles the role of Warren Lipka. The American Horror Story creator and star transitions from Horror to Animal leading a largely unknown but excellent cast. The real Warren Lipka with a T-Rex tattoo turning off a ceiling fan comes across on screen as someone who should have his own reality show, or perhaps unreality show as the man’s facts are brought into question throughout the film. Last year young Irish actor Barry Keoghan co-starred in an emotionless and unrealistic role in The Killing of a Sacred Deer. In American Animals, Keoghan stars as the co-initiator of the heist Spencer Reinhard in an another emotionally stunted role but this time in a realistic way explained with drug use. Jared Abrahamson and Blake Jenner complete the cast of the four man book heist crew with Abrahamson giving perhaps the best performance of the group. The role of the movie though goes to librarian Betty Jean Gooch (Ann Dowd) who both brings forth your sympathy of character and for the real life woman herself.

As the label “true story” gets thrown onto movies that are anything but real, American Animals and Bart Layton bring the term back to reality. Though it may be their version of reality, at times told in two conflicting memories, it's still their story. For the price of a cheap house in Kentucky, Layton directs a studio flawless feature. Any film that makes you want to see more of director, possibly heading other true stories into features, more of the cast, especially Ann Dowd and more of the real life man whom the story is based on Warren Lipka just screams good filmmaking. It’s just an all-around excellent movie that’s only limited by its content of story to tell.