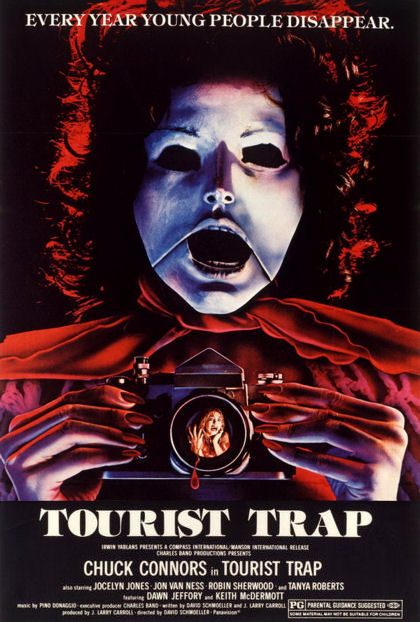 A flat tire and deflated spare strand a young couple in a remote location. With their friends not far behind them, a walk into town to fix a flat didn’t seem like the deadly idea it’d turn out to be. A forgotten roadside museum becomes a tourist trap for these stranded youngsters. The mannequins that fill this museum come alive and with deadly consequences. Headed by a masked maniac with telekentic powers and a murderous, depraved mind, this is a Tourist Trap of death!

Before the director of the original Puppet Master brought Charles Band’s dolls to life, David Schmoeller brought some of the creepiest mannequins to be found on film to life in the forgotten 1979 Tourist Trap. Leading the cast is The Rifleman himself Chuck Connors as the aging actor tried to transition from Westerns to horror with a Boris Karloff revitalization of his career. While Connors may not have landed the coveted role of Frankenstein’s Monster, his mannequin-faced performance is genuinely creepy, especially as the aging actor forcefully makes out with a love interest Molly (Jocelyn Jones) some thirty years his junior.

David Schmoeller winds down the psychedelic horror largely found throughout the 1970’s with the budding slashers that would dominate the 1980’s. This rarer, late 1970’s psychedelic slasher blends well. Some scenes with the mannequins and a mannequin masked killer are genuinely creepy and frightening. We’re also given mindless young adults like Becky (Tanya Roberts) that seem to serve only to add to the body count. This late 70’s combination of sub-genres may be just as forgotten as the Tourist Trap in the movie but if it doesn’t mean there isn’t some classic pieces to find in this horror museum.