Review of "Rabid" by The Headless Critic 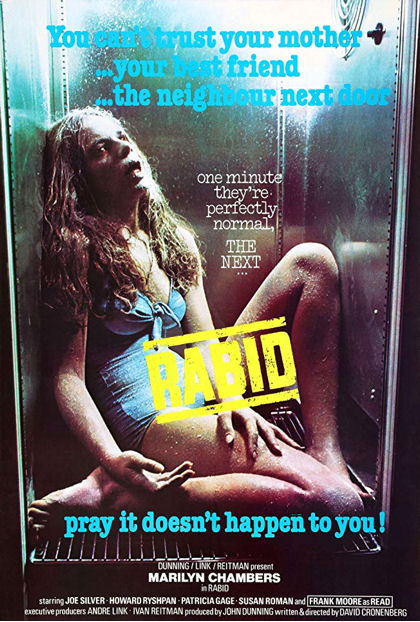 After a horrible automobile accident leaves a woman clinging to her life, the only hospital close enough to possibly save her is a plastic surgery center. An experimental skin graft surgery leaves Rose (Marilyn Chambers) with an unquenchable thirst for more human flesh. She’s gone Rabid and those she feeds on turn into zombified humans with a taste for blood. An epidemic is spreading across the city. Plastic surgery will be the death of western civilization, literally.

Before his successful succession of an early 80’s quadrilogy of horror films in Scanners, Videorome, The Dead Zone and The Fly, David Cronenberg released a Rabid little film more commonly forgotten by modern audiences but equally worthy of being mentioned among his horror best. Rapid preys on the fears of the still largely new and unknown aspects of plastic surgery. The fear of humans going rapid or contracting rabies and going mad is played out on screen.

Rose goes from an early hapless victim under the control of man, to a predator of all mankind. Her sex fueled primal urges take over as she goes on the run and on a killing spree. Did I mention that it’s all to satisfy the new vagina like orifice she’s developed in her armpit with a mini fanged penis inside it that’s craving to infect people? If that isn’t enough to make you want to watch this gritty 70’s film, nothing will. You might say Rabid is the worst kind of STD, a bloody and deadly one.