Review of "The Prowler" by The Headless Critic 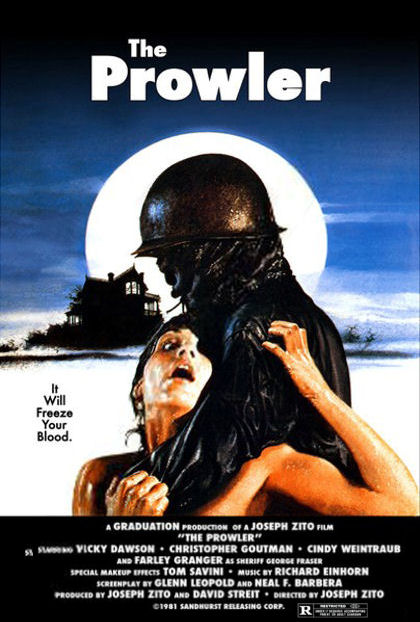 While away at war fighting for his country, a soldier receives a “Dear John” letter from his beloved girlfriend at home. He went off to war a man in love, he comes home a killer. Driven mad by the loss of his lady love this broken soldier gets his revenge. “Just when you thought it was over”, the human exterminator returns thirty-five years later in his Army fatigues to stalk a group of college kids in a small New Jersey town. “If you think you’re safe… you’re DEAD wrong!” This is “The film that shocked America!”

A soldier killing people with a pitchfork? Why not… This Prowler isn’t original by any means as most slashers are not. In fact director Joseph Zito’s first slasher movie is more like a copy of a copy with a confusing script that throws in every cliché before slasher films had become so completely overdone by the end of the decade for everything about them to become cliché. Teenagers, a school dance, even in college, as many boobs as there are bodies and a cat and mouse killer who’s supposed to look menacing.

The man who brought us what many consider the best of the Friday the 13th films brings us a confusing mess of a movie that works for its kill scenes. An army man who puts down his gun for a farmers pitchfork still gets some gruesome deaths headed by special effects master Tom Savini who is the real star and saving grace of this film. Savini deaths in the Prowler are phenomenal and worth watching a mindless slasher for alone, including a headless critic notable exploding head. This is one you’ll want to watch for the kills.