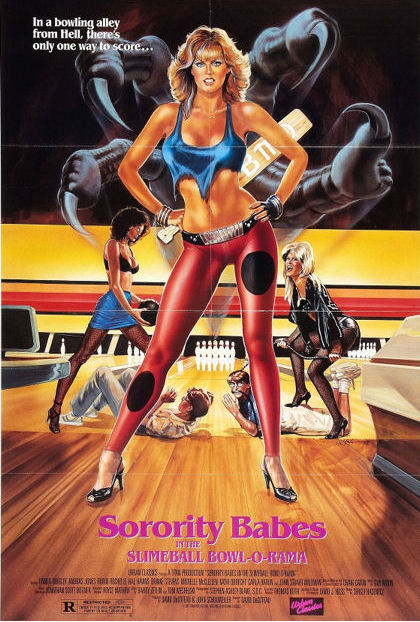 Three frat boys who’ve never touched a breast are breaking the law tonight just to see one. The boys are playing peeping-toms to the Tri-Delta sorority house for their initiation night of new pledges. Watching eighteen year old girls get spanked in their panties isn’t enough for these nerdy, loser frat boys. When the boys sneak into the house to watch the pledges shower off the whipped cream their initiation has them covered in, they get caught by the rest of the girls in the house. To keep the sisters from turning them in, the frat boys agree to accompany the pledges on their final hazing of the night. A slip of the fingers, a broken trophy and this group of college kids have just unleashed an evil Imp to wreak havoc on the world! The Imp is coming and he’s a bigger slimeball than the perverted teenage boys who got them all there.

The ultimate 80’s movie that time forgot! David Decoteau is a directing machine of everything steam. From raunchy comedies to nudity filled horror and some suggestive titles, this reviewer hasn’t seen that may suggest more adult oriented films. Sorority Babes in the Slimeball Bowl-O-Rama is everything you’d expect from the title including nudity, comedy, laughable horror and a decapitated head rolling down the bowling alley lane. There is a lot less slime and some surprise stop motion animation thrown in for good effect.

The budget is low, the cast is small, the pledges are two, the breasts are plentiful, the laughs are lame but it has a good theme, some fun music and an all-star, out of place, stop motion Imp that absolutely steals the show. The evil Imp is enjoyable stop motion done poorly, with a voice and attitude from The Muppets. It’s completely out of place in an otherwise live action movie and there’s no reason this should work but it absolutely does. Linnea Quigley also provides a kickass performance as lather clad, rocker chick Spider. Sorority Babes in the Slimeball Bowl-O-Rama may not be a classic but it’s certainly a classic 80’s B-movie in every way.