Review of "Basket Case" by The Headless Critic 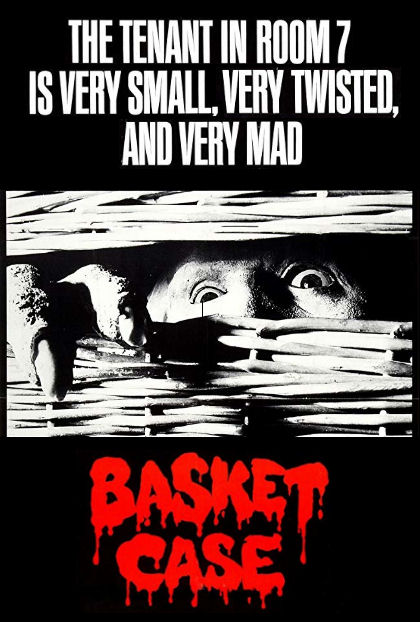 A pocket full of money and a basket full of the unknown, Duane (Kevin Van Hentenryck) just arrived to his hotel room in New York City. “The tenant in room 7 is very small, very twisted and very mad.” Duane is here to get revenge on those who wronged them as a child. He carries his basket with him everywhere he goes. All is going well until a receptionist shows interest in Duane. He’s never had that happen before. He won’t approve, he’ll never allow it. You can separate brothers but you can’t remove their love. All hell is about to break loose, literally break free from its basket. “Its mother conceived it… You won’t believe it…”

Basket Case is an early 1980’s film that captures the New York sleaze of the era. It’s also a loving story of two brothers separated at a young age who continue on together, caring for one another, even if it means death. As ridiculous as it’s concept of a Siamese twin brother who isn’t much more than a cancerous growth that’s been removed, Basket Case knows what it is, it does it well and has fun with it.

Before Arnold Schwarzenegger and Danny DeVito called themselves Twins, Basket Case took it to another level with the picture perfect 80’s child Duane Bradley and his brother Belial. Twins might have been a better movie if DeVito was being carried around in a basket! Any child from the era has seen the cover at their local video store. If you never rented it you’re missing out on one of the unsung 80’s horror classics.