Review of "Re-Animator" by The Headless Critic 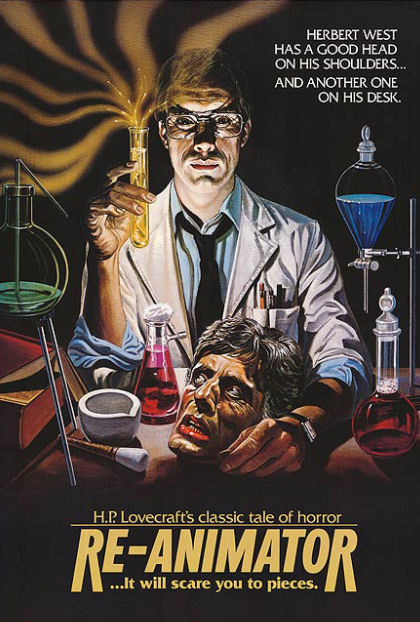 Who says you can’t live forever… Looking to make some extra cash, med-student Dan (Bruce Abbott) and his girlfriend Megan (Barbara Crampton) rent out a spare room to the odd student in class. Money leads to madness. Dan grows concerned over his new tenant Herbert West (Jeffrey Combs) as bizarre things begin happening. When Megan’s cat goes missing its severed body is found in Herbert’s room. The weird kid in class may hold the key to eternal life. The two med-students attempt to defeat death transitioning from animal to human. Can you be a murderer if death isn’t permanent? You can definitely be insane. There’s a thin line between genius and insanity. The dead are being reanimated but they’re not quite right. The worst laid plans are built on honorable intentions. Welcome back to life.

Largely considered the greatest adaptation of a H.P. Lovecraft tale to film, this Frankenstein’s monster is a less traditional version of the undead. Re-Animator captures that hard to find, perfect level of in-between. Comedy and horror are layered in a Romero zombie film meets The Man with Two Brains. It's Frankenstein and Young Frankenstein brilliantly blended together and it works. Jeffrey Combs performance as Herbert West shines as bright as the re-animation serum used in the film, playing perfectly off of Bruce Abbott’s straight guy who’s in over his head. Barbara Crampton makes the most of her girlfriend role with an additional good performance by David Gale that deserves mentioning. Re-Animator breathes life into everything I love about 80’s film from performances, to over the top practical effects. It's simply a must see for every horror movie fan.