Review of "Pieces" by The Headless Critic 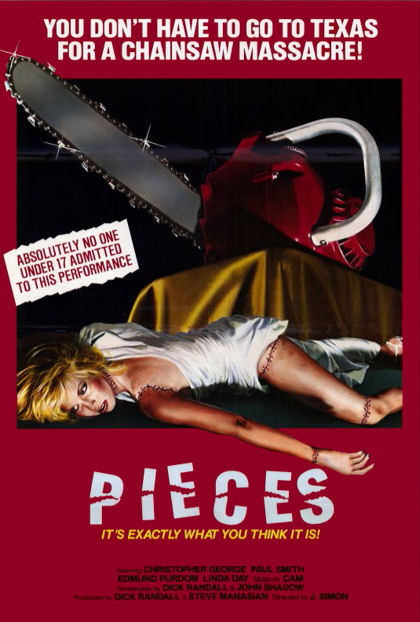 Absolutely no one under 17 admitted to this review.

“Pieces… It’s exactly what you think it is!” The curious mind of a young boy is forever fractured by his repressive mother when she admonishes him for putting together a puzzle with the image of a naked woman on it. The young boys response it to cut his mother up into puzzle pieces with an ax. Forty years later at an University campus in Boston, a serial killer is dismembering bodies with a chainsaw and keeping pieces for himself. “You don’t have to go to Texas for a chainsaw massacre!” The police have placed a plant on campus to catch the killer. “If you think you’re safe, you’re DEAD wrong.”

After 1974’s instant classic The Texas Chain Saw Massacre, the world was calling for more deaths at the end of a chainsaw blade. Four years before Tobe Hooper revisited the Franchise, Spain made their version of an American chainsaw slasher. The concept is strong for a horror film, exploring the fragile psyche of a child turned killer. Marketing is as shameless as the taglines that sell the film suggest. The execution is a blatant rip-off of both The Texas Chain Saw Massacre and the city of Boston. Unoriginal doesn’t have to mean it’s bad.

When Spain tries to copy American slasher films, it actually turns out pretty well. The ultimate form of a slasher movie may be dismembering a body. It’s even creepier when the killer is keeping the pieces for his own human jigsaw puzzle. Forget the fact that a body dismembered by a chainsaw blade with literally be torn to pieces and help put together this human puzzle of gore.