Watching Movies - The Forest of the Lost Souls

Review of "The Forest of Lost Souls" by The Headless Critic 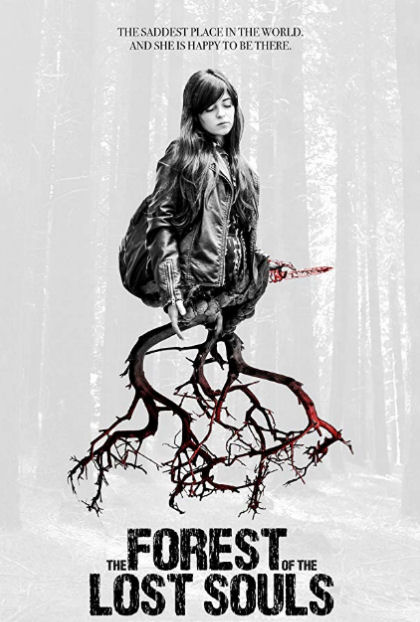 In Portugal there’s a forest that’s the most popular place in the country for people to commit suicide. It is perhaps the saddest place on earth but she isn’t sad to be there. If you couldn’t help but be a killer, could you at least help who you killed? “I know this may sound silly, but you can’t kill yourself with a heavy heart.” Those who travel to The Forest of Lost Souls as their final resting place are dying by a hand that’s not their own. Is assisted suicide murder just because enjoyment is taken from it? It is when death follows you home.

Carolina (Daniela Love) has made herself at home within The Forest of Lost Souls, preying upon its inhabitants there. Ricardo (Jorge Mota) has come to escape a daughter lost, a family broken and a life he feels he’s messed up from the beginning. “Two strangers meet in the world’s saddest place, but one of them is happy to be there.“

Filmed in black and white, perhaps to hide its flaws, The Forest of Lost Souls is beautifully shot with a simple story and a cast that if they didn’t pull it off, it was lost in translation. Carolina is a lively and disturbing character you immediately become enthralled with. Ricardo exerts a sadness of Catholic guilt that may not be a man at his end but definitely endures to sympathy.

The brilliance and confusion with these lost souls is the first half being a getting to know you journey of youth and old age, both meeting at their ends. The second act is a brutal and realistic slasher without proper motive or reason. The finale is an underwhelming look at a young girl who is both disturbingly simplistic yet even more disturbingly complex. The three stages are off-putting as they blend together, almost feeling like a story of shorts. They also compliment each other well creating a coming of age slasher that keeps the viewer off kilter through this entire journey of the end of life.

“Sadness will last forever. The more we analyze a funny story the sadder it gets. Time destroys everything. The idea of suicide is a great comfort, a way to survive bad nights, away from everything and everyone. I’ll be here to end your sadness. Welcome to The Forest of Lost Souls.”