Review of "The Barn" by The Headless Critic 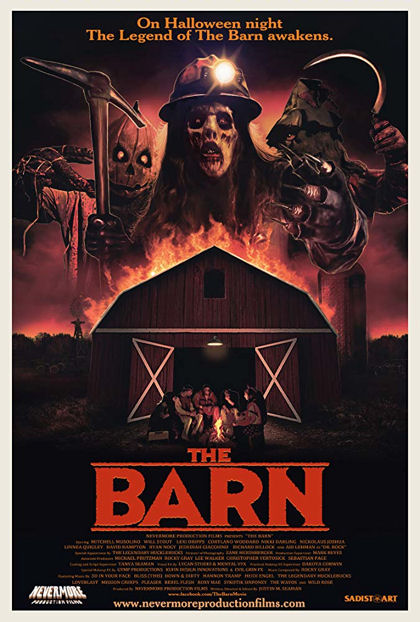 “Every year on Halloween, the legend of the Barn tells how evil is released, takes the form of three demons dressed as trick-or-treaters with evil grins. The Boogyman, wants to crack your back, cut you into pieces and carry you in his sack. The Pumpkin Man, Hallow Jack, wants to carve out your head, slash you with his vines until you’re dead. And if you get scared, don’t you cry or the Candy Corn Scarecrow will surely eat your eyes. Three knocks on their door shall set them free and only if you say the words trick-or-treat.”

It’s their final year of high school and the end of an era as Halloween rolls in and the 1980’s closes in on the 90’s. A group of seniors led by best friends Sam (Mitchell Musolino) and Josh (Will Stout) make a detour on their way to a rock concert. Their decision to find a few cheap scares before Halloween night leads them to a deserted, nowhere town where they awaken three evils that have been hidden away inside The Barn!

“The part many folks don’t realize is it was the devil himself that sent those creatures here to take the flesh of the living back to hell.” This Barn told tale brings forth three harrowing creatures to kill you this Halloween.

“The miner, the one they call the boogeyman, he’s the devil’s right hand man. In the beginning he was in charge of digging that godforsaken tunnel out of hell into our world.”

“The pumpkin man, oh he’s the watcher. He can take any one of those pumpkins out of his patch and use them for his eyes to watch over the land. He signals the other ones of approaching flesh.”

“The strawman, he’s the protector of the harvest. He makes sure the crops grow right and stay safe. He’ll chew up anything with those rotten teeth of his if they try to enter their grounds upon that corn.

This throwback to the 80’s B-movies of old is even filmed grittily like on a VHS tape. A group of teenagers, a small town and an urban legend that just won’t die, but you will! The Barn is set in 1989 and captures the feel of a movie from that era. Mitchell Musolino comes across as a young Dax Shepard and that’s meant as a compliment as he leads a surprisingly good cast of unknown youths. The three evils are corny and simplistic but fun. They’re well thought out by writer and director Justin M. Seaman with their rhyme and backstory.

The Barn aspired to be a straight to VHS tale of 80’s and that’s exactly what it accomplished. It has fun practical effects and is just fun in general. It’s a film older horror faithful will appreciate for its nostalgia and something that most other horror fans will enjoy. It may not have set new heights in horror but is a little bit Hell Night, a little bit Monster Squad. If you love the straight to VHS horror comedies of the 80’s this is the unknown drive-in feature you’ve been waiting for.