Review of "Face of Evil" by The Headless Critic

Face of Evil – 2016
Production by: V-Movie
Distribution by: Gravitas Ventures 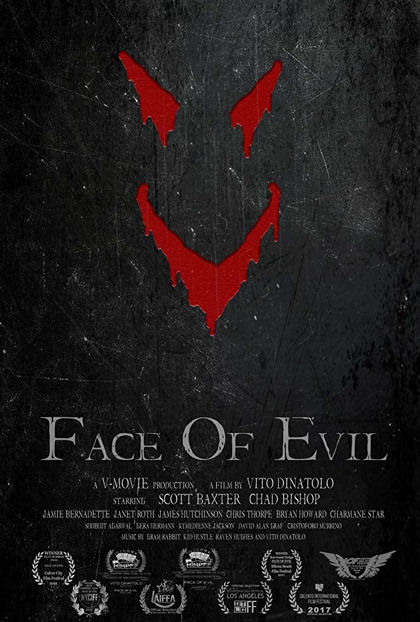 All of life’s problems start with a little kiss. This Independence Day, a sister’s (Jamie Bernadette) celebration for a soldier’s return home turns deadly when an infection spreads throughout their group of friends. Private Jay (Scott Baxter) and his ex-sergeant (Chad Bishop) must survive a zombie outbreak in demon form. This is an epidemic straight from hell. The road to salvation is paved with demons to kill. “What’s your demon?”

An indie feature in every way, what at first appears to be an unprofessionally made film that’s easily dismissed, the face of this evil turns the other cheek, showing just a little bit more. Writer and director Vito Dinatolo’s first feature film is unsettling, sometimes appearing amateur, sometimes proving genius. Nothing about this indie feature is traditional. Dinatolo has a unique eye with throwback cinematography that defies modern day Hollywood standards.

F.O.E. is off-putting, largely due to a perplexing but very effective score. A quirky comedy of horrors is offset with a soundtrack that is both spaghetti western and a calm wind winding down your day as you fall asleep at night. It’s the most Evil Dead-esque film I’ve seen since Evil Dead II. It’s a comedy but just barely. It is horror with humor.

If made thirty years ago Face of Evil would have been found as an unknown movie picked for its cover from the horror aisle of your local video rental store. As you took it home to discover what the VHS tape inside holds, you wouldn’t find the most refined film. You would find something memorable because it’s different, something that would be remembered with fondness by every young horror fan who watched it even thirty years later as an adult. I believe this comparison is as confusing with its complexities as the movie itself. It’s also a great compliment.

Face of Evil may not get the full recognition it deserves leaving me to question if The Evil Dead would have found its audience if it had been released in a modern day VOD flooded film society. This critic recommends you give this independent film a shot and look past your initial reaction to want to lump it in with every other low budget horror film you start but never give a chance. This one is different, it’s good. It is lacking a uniquely comedic Bruce Campbell performance that could have helped solidify this evil into cult status, but damn that score is good.