Review of "The Meg" by The Headless Critic 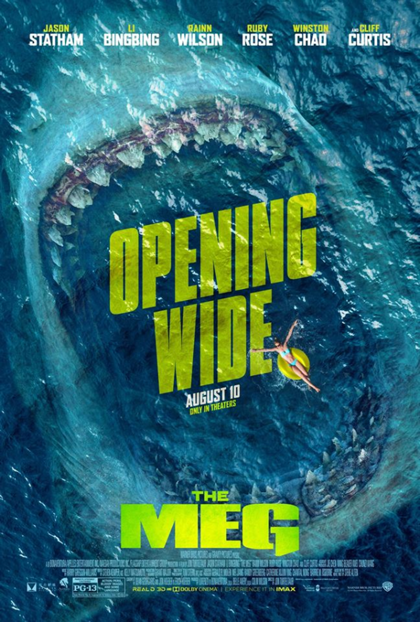 Expert diver Captain Jonas Taylor (Jason Statham) has gotten a reputation as one of only three people who’ve attempted oceanic rescue missions below 11,000 feet. An easy reputation to obtain when you’re the only rescuer who’s survived. An exploration vessel to the newly discovered deepest part of the ocean just got attacked by something very large, something Captain Jonas Taylor has survived before. Former Captain Taylor is asked to come out of retirement and bring home the trapped crew in the world’s deepest underwater rescue mission ever. When new depths are reached in the oceans floors, a 75 foot Megalodon follows them home. What will the world do when,
“The most feared predator in history...is no longer history.”
“She's the biggest thing you never saw coming.” “Opening wide”

So Warner Brothers takes a script that would normally be reserved for a Syfy channel original, gives it an excess of budget, proper CGI and a wide theatrical release. Let’s see what happens… The Meg is simple, blunt and exciting without the excess of blood, boobs and bad acting you’d except from such a concept. A Megalodon is unleashed in modern day waters and it’s up to action star Jason Statham to stop it. Hell yeah! Surprisingly the Megalodon isn’t as big as I thought it would be from the trailer and posters going in. I personally enjoyed this as both King Kong and American made Godzilla movies have proven recently, you can get too big with your monsters. The CGI is nearly flawless, a nice change to the giant animals of Syfy originals. This one boils down to whether you’re a giant killer animal genre fan. Syfy originals keep getting made for a reason, they have a fanbase. I don’t generally like them but when it’s done right I enjoy giant killer animal movies as much as the next person and I did like this.

The first third of the film contains a couple of rescue missions that are a straight up throwback formula we’ve seen a thousand times before. We open with a questionable heroic act. Years later a team is formed and a group of them are put in imminent terror. It’s up to our hero from before to come back and save the day once again. He’s met with resistance, both human and other, but in the end his badassdom prevails. We’ve seen it a thousand times but there’s a reason for that, it’s comfortable and it works. From there the battle of Man versus Meg is on.

Jason Statham suits up slightly more than he strips down. Saving beauties from certain imminent underwater death is a regular occurrence for Statham in this one but what else would you expect? At the call of one heroic adventure he walks away from the camera removing his shirt in a Superman fashion as he gets ready to put on his underwater “superhero” costume once more. I blasted Wonder Woman for a similar action as she walks onto the battlefield flipping her hair, but that was an actual superhero movie that had a lot of potential, this is a modern day Megalodon monster movie.

Statham isn’t the only character, in a diverse cast of crew. Whether you’re a Statham fan or not, the cast is excellent. A slew of familiar faces get characters with just enough screen time they’re barely able to define themselves and make you care about them enough to not want to see them die. Even though you know most of them are going to eaten. The brilliance of casting should be commented on as most of the faces will be familiar to audiences from television roles which helps the viewer have a natural kinship to those they recognize but may have a limited amount of screen time. A perfect example of this is Masi Oka who not only has a natural likability about him but is also familiar with a large portion of the audience as Hiro from the tv show Heroes. Particular kudo’s goes out to Ólafur Darri Ólafsson. The hulking man stands out with more character and a natural likability than the rest of the more familiar cast around him. I’m deeming him now the next gentle giant of Hollywood who should get some much needed exposer with his upcoming casting as Skender in the next Fantastic Beasts movie due for release later this year.

Of course there are a few scoff worthy moments in a world of Megalodons. I could have completely done without the whole underwater ships battling The Meg. Reminds me to TIE Fighters taking on bigger monstrous ships out of Star Wars. Not something I want to see in my realistic other than the prehistoric animal that’s still alive and eating you movie. There’s more self-sacrifice in this film than there would be in real life but I personally feel it’s a nice change to a Hollywood that usually focuses on the bad side of human beings instead of the good. Every Hollywood movie has to have a love story, even if it's a side one. It’s corny as can be but Shuya Sophia Cai is absolutely adorable and gets away with some cute laughs making fun of Crazy (Jason Statham) and his budding romance.

The Meg isn’t going to win any Oscars but if you know what movie you’re walking into when you go, they did it well. The run time is a little long. At times it felt like the filmmakers thought they were making the next Abyss and not a giant summer shark movie. That actually probably helped the films quality overall. If you just go with the concept and allow yourself to have some fun, it’ll be an enjoyable movie. I mean it’s a Megalodon movie folks, what do you expect? I want to thank you all for reading my review, I’m “Pleased to eat you.”

A Cast as Large as The Meg