Review of "Rock Steady Row" by The Headless Critic 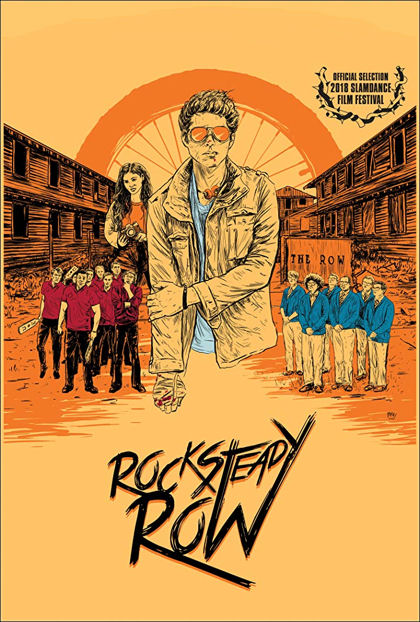 “College has changed. You see the universities used to be a place of higher learning, until the administration became corrupt. Tuition's skyrocketed, meal plans were abolished and student housing collapsed. With overwhelming debt and the fear of loans, the students of Rock Steady University turned on one another. Fraternities rose in power while the sororities were forced into hiding. Two houses competed for control of Rock Steady, Cappa Brutus Omega and the High Society. Both houses took control of the most valued commodity on campus, the bicycle market. Students will endure all of this just to earn a degree because at Rock Steady University, only the strong graduate, let alone survive.”

Rock Steady University student Piper (Diamond White) has been tracking the activities of both of the school’s fraternities who act more like gangs than the mindless frats they’re supposed to be. Piper’s new coed roommate Leroy (Heston Horwin) just unwittingly rode his bike right into the middle of a gang fraternity war. When head Cappa Brutus Omega alumni Andre Palmer (Logan Huffman) takes Leroy’s prized bike, “with no one in his corner, the freshman realized that if he ever wanted to see his bike again, he’d have to bring down both fraternities.” Leroy pledges to take down the rival frats initiating a war that won’t be so easy to get out of.

I love the alternate reality created by first time feature film writer Bomani J. Story, captured at the youthful directing hands of Trevor Stevens. School housing looks like crack houses, college students ride on bikes instead of in cars and fraternities have resorted to gang warfare with number 2 pencils while the new kid in class puts on his walkman headphones to kicks some ass.

Rock Steady University creates its own reality with street wars at school. When his bike is stolen, college freshman Leroy steps into the middle of a school ran fraternity bike racket he won’t easily be able to get out of. This one goes all the way to the top, headed by a crooked Dean (Larry Miller). Someone has got to defend today’s youth. Rock Steady Row is a different world just like college. And just like your first year at college, it's a little awkward, kind of naive but by the end, it will have been a time you'll never forget.