Review of "Chuck Steel: Night of the Trampires" by The Headless Critic

Chuck Steel: Night of the Trampires – 2018
Production by: Animal Studio 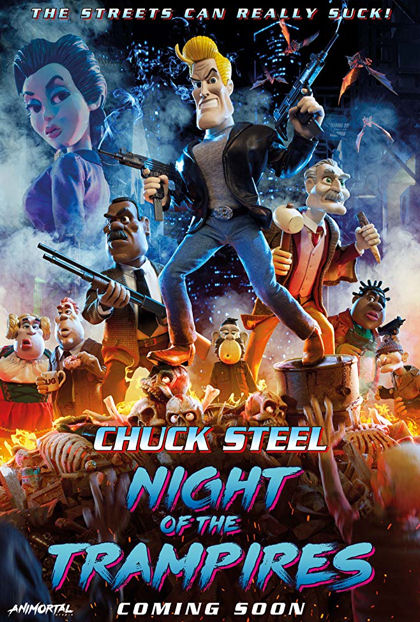 Chuck Steel (Mike Mort) is a renegade, lone wolf, loose cannon, cop on the edge who doesn't play by the rules. He has an anger problem but he’s also the best goddamn cop on the force. Or so says his boss, beleaguered police captain Jack Schitt (Mike Mort), who’s about as much use as a chocolate condom. Chuck hates clowns, has the biggest penis I’ve ever seen on a man and loves his recently deceased wife Lucy (Samantha Coughlan) who was murdered by a piece of shit ninja warlord. He’s on the brink but he likes it there. It’s a little further from the edge than he’d prefer but he can always commute.

Chuck Steel works alone. Whether it’s a suicidal rookie, a Swedish exchange cop or a Monkey in a cop suit Captain Jack Schitt keeps scraping the bottom of the barrel to assign him new partners, they just don’t have a long shelf life if you know what I mean? Like any good bad boy police officer Chuck hates the station psychiatrist Dr. Cular (Jennifer Saunders). She has Maloney (Mike Mort) so emotionally liberated that if some street punk shot him he’d probably apologize for bleeding so much. Martinez is so in touch with his inner child that he won’t go anywhere without a diaper and Sanchez is so in touch with his sexual identity that he’s taken to wearing a gimp mask on stakeouts. As for the Captain, that’s really starting to scare me.

It's not 1985 anymore...it's 1986. The future is now and it’s gone to hell, literally. A series of disappearances in town have the police perplexed. The crime scenes are all the same, covered in blood with no sign of a body. When Chuck goes to interview a surviving victim in the hospital, he ends up stopping a would be murder, arresting the would be murderer. Dr. Abraham Van Rental (Mike Mort) is a mad old man making claims he must stake the liver of alcoholic vampires running amok in the city.

You have heard of vampires but have you ever heard of Trampires? Vampires used to rule the land but around 1400 bc everything got very PC and their way of life was deemed unacceptable. Condemned to a life of darkness and eating half eaten burgers out of bins, they got really depressed and took to drinking heavily. Over the centuries their craving for blood and their craving for cheap booze became intertwined thus the Trampire was born! They are creatures of darkness whose only goal is to attack drunken people coming out of bars. It’s kind of like a two for one. They wait for your blood alcohol level to be just right so they can get their drink and their fill at the same time.

Chuck Steel takes a walk down Shit Street as he comes to the realization that these Trampires aren’t just monkey shit on a pool table. He takes on a new kind of partner in Dr. Van Rental. If the partners drink enough alcohol they might be able to lure the Trampire’s out of hiding where they will throw holy coffee on them and stab them in the liver with a stake. A both sobering and fatal finale. After all, what’s the best way to catch a Trampire master? Bate!

If you think this review is about to end, don’t hold your breath sugar tits, I’ll have a fire in my belly until I’m dust in the wind. Chuck Steel is the beyond cool cop the 80’s always tried to create but never quite did successfully until 2018. He is Johnny Bravo, Dirty Harry, Martin Riggs, Frank Drebin and Cobra all in one claymation animation that's 100% man. This isn’t your sophisticated Fantastic Mr. Fox, Chicken Run or Wallace and Gromit. Night of the Trampires has the sense of humor of a fart joke that I sophisticatedly enjoy. Chuck Steel may kick ass to a production level score of a Tim Burton masterpiece but this is Claymation outside of Burton’s hands. It’s finally made for adults, it’s completely juvenile and it’s absolutely brilliant.

Night of the Trampires is a follow-up feature to the Mike Mort made, Chuck Steel short titled Raging Balls of Steel Justice that you can find online. Hopefully the short plays before the Night of the Tramps theatrical release and will be found on the digital disc features. Most of this review is quoted straight from the dialogue in the movie itself. I’ll leave you with these inspirational words, “Work hard, eat your greens and never stick your dick in a mangle.” If you don’t like my words you can shove your ass up your ass.