Review of "Summer of 84" by The Headless Critic 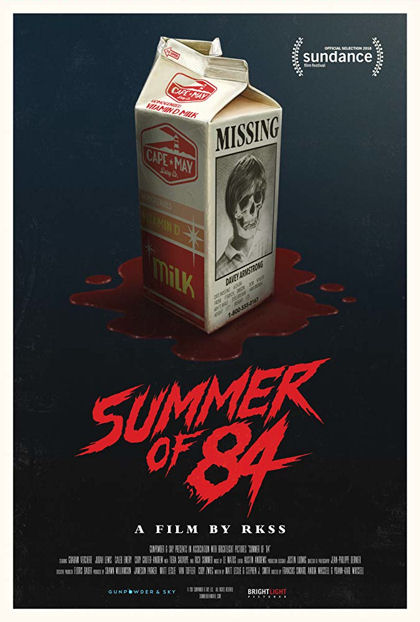 Ipswich, Oregon the summer of 1984, young boys ages twelve to fifteen are going missing. Davey Armstrong (Graham Verchere) is fifteen and he and his three best friends would be worried but nothing ever happens in this nothing town. "That’s the thing about this place, it might all seem normal and routine but the truth is the suburbs are where all the craziest shit happens. Just look past the manicured lawns and friendly waves, inside any house, even the one next door, anything could be happening and you’d never know." One day Davey is playing a game with his friends, the next day the boy he sees in his neighbor’s house turns up on a milk carton. Suspecting your police officer next door neighbor is a serial killer is a big accusation. Be careful who you back into a corner. "Even serial killers live next door to somebody."

A lot of movies have been inspired by the story Alfred Hitchcock adapted to film in the classic Rear Window. Disturbia, The Stepfather and even Fright Night brought more modern day adaptations to the short It Had to Be Murder. I dare say Summer of 84 does it better. Directing duo François Simard and Anouk Whissell brilliantly play of the off the recent success of similar productions like the Netflix hit Stranger Things and 2017’s summer blockbuster IT, taking a trip back to the 1980’s via a group of teenagers. You’re lured into a story and set-up you think you know. A dark film with light comedy, you expect to get a movie like The Burbs, you don’t. Unlike the blockbuster IT and hit Netflix original Stranger Things, Summer of 84 has a real monster with a serious tone that’s hidden under off-kilter childhood comedy and what you expect to see.

With multiple casts of kids in similar roles already making an impact with audiences, Davey Armstrong and his group of friends Tommy ‘Eats’ (Judah Lewis), Curtis Farraday (Cory Gruter-Andrew), Dale ‘Woody’ (Caleb Emery) and Nikki (Tiera Skovbye) manage to find their own identities which is an impressive accomplishment for both the directors, writers Stephen J. Smith and Matt Leslie and the young actors. Also impressive is the casting of Rich Sommer as the suspected next door child murdering Officer Mackey. The baby faced actor makes it hard to believe he’s anything but good guy, keeping the kid’s accusations in question and the outcome unpredictable.

The creating duo of François Simard and Anouk Whissell surprised the world creating an instant cult fan favorite in 2015’s Turbo Kid. Their follow up feature proves the pair can also choose a script that’s not their creation and give those same fans exactly what they want to see. In an out of touch Hollywood world that has little idea as to what most people want to see, these two have struck a chord with a large portion of audiences. They just seem to get it. If they can remain grounded in reality while their actual reality is trying to sweep them away in the glitz and the glamour Hollywood, I expect huge things to come as bigger budgets are offered to match their sure to be growing following.

WYH Interview with star of Summer of 84 Graham Verchere