Review of "Climax" by The Headless Critic 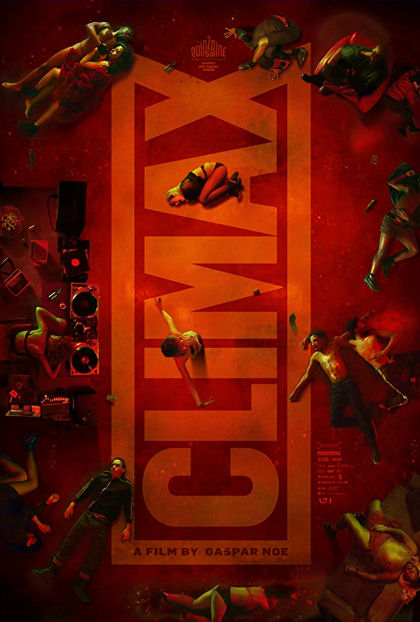 A group of young dancers at a closed down boarding school in the middle of forest celebrate the end of their three day rehearsal with one last party. As they gather around the sangria bowl, a night of celebration and partying is thrown into madness as someone has spiked their drinks. Paranoia, psychosis and nirvana, the music continues to play as each member of the large group experience their own trip. Sex, love and violence swirl in a build to the ultimate Climax.

There are bad movies that try but because of limited knowledge or limited funds, just don’t succeed as a good movie. Climax has good filmmaking but Gaspar Noé gets caught up once again in the carnal art of filmmaking and forgets the purpose of a movie is to entertain. Or perhaps the intended audience is the sexualized, pretentious arthouse crowd this film seems to play for.

Of an hour and a half runtime, a promising blood and guts horror opening of a body crawling through red snow leads into twenty minutes of interviews with the large group of actors/dancers. Interview introductions are followed by a continual fifteen minute dance sequence shot around the same large group. It’s an impressive shot to film that’s near torture for anyone expecting a movie to sit through as it seems never ending.

After what seems like an endless hour we’re giving something more than dancing, interviews and conversational ass play. We’re given drug induced madness. The build to this point has the viewer invested in none of the characters who have shown little redeemable value to care about. The events to finish the film which should be when the horror sets in, are without climax.

The film that closed FrightFest UK 2018 ended an amazing film festival without a proper climax.