Review of "Cynthia" by The Headless Critic

Cynthia – 2018
Production by: Girls and Corpses
Distribution by: Indican Pictures 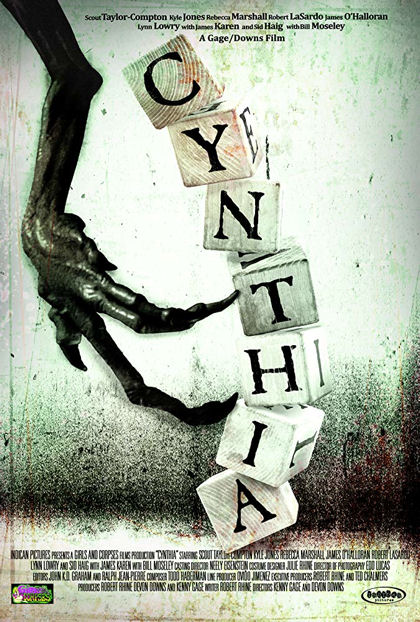 Michael (Kyle Jones) and Robin Taylor (Scout Taylor-Compton) are the picture perfect, all-American couple. Well nearly picture perfect. “Robin Taylor wants a baby... in the worst way.” She’s willing to overlook everything to get what she wants. She can’t conceive and every time they try it feels like it costs them ten thousand dollars. 3 years at 25 injections a month, that’s 900 in vitro fertilization shots. Through the miracle of modern day medicine, a large uterine growth gives way to the birth to a baby. Some couples will do anything to have a child, even die for it.

“This movie is not recommended for pregnant or nursing women.” When the Taylor family brings their baby home from the hospital something else comes home with them. From the demented mind that brought you Girls and Corpses, perverted comedian Robert “Corpsy” Rhine brings his unique magazine to the big screen. The result is the best killer growth I’ve seen in cinema since Basket Case. It may also be the only killer growth I’ve seen but that just means it’s not an overdone concept.

A lighter tone, more comedic modern update to the Basket Case classic includes some fun roles from familiar faces. Laurie Strode 2.0 an adult Scout Taylor-Compton continues her final girl role in this campy ovarian cyst slasher. Investigating her crimes is fellow Rob Zombie alumni Sid Haig. Always a man of class, Capt. Spalding is known for always playing a bad guy role so what does he get in a Corpsy made film? None other than Detective status. Another “always plays the bad guy role” actor and familiar face to all, Robert LaSardo gets to clean up the blood for once instead of spilling it.

The most fun performances in a film that has fun with its performances may just be its cameos. There’s an innocent baby in this house as well as a disgusting, evil, human growth. One of them doesn’t smell so good and the potential nanny (Lynn Lowery) doesn’t see too well to for a diaper change. One of horrors most haunting faces, Otis B. Driftwood himself, “Chop-Top” Sawyer Bill Mosely fills out the trifecta of Rob Zombie alumni in this film. He also fills out his dress quite nicely. Bill is known for playing a psychotic bad guy and there may not be a more badass role than a woman who’s ready to take on the entire Navy. When he’s turned loose to do his thing his performance is always fun and you can tell he was given his own discretion in a dress.

The real horror in Cynthia are the trials of trying to have a baby. For anyone looking for a fun horror filled comedy, directors Devon Downs and Kenny Gage deliver laughs and light-hearted entertainment for Girls and Corpses making Cynthia a worthy centerfold.