Review of "Patient Zero" by The Headless Critic 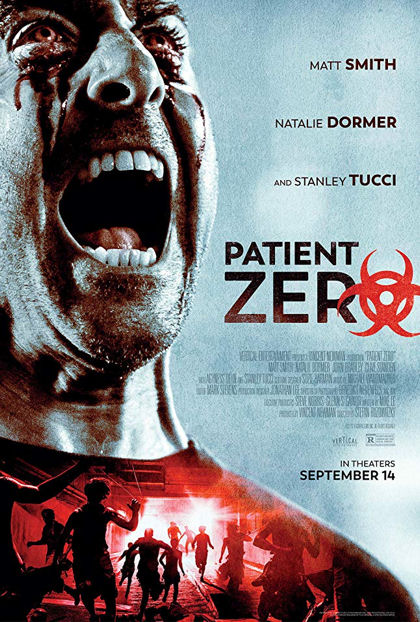 A new super strain of rabies commonly known as Mad Dog disease alters the brain and nervous system turning humans into super violent predators. There is no known treatment. The infected are spreading faster than can be contained. It has crippled the world, seven billion and counting. The few medical and military personnel left, desperately search for Patient Zero to try and find a cure.

Hidden underground in a nuclear silo is a research group headed by with a military guard and one special soldier Morgan (Matt Smith) who was bitten but is immune to the super strain. He the only one who has the ability to understand and communicate with the rage induced infected. He’s trying to understand an enemy that thrives on violence, rage, danger and destruction and find the origins of their disease. They are smarter than anyone knows.

The newest strain of zombie-esque film comes from the creative mind of Matt Le who writes a disease that’s far more realistic than the walking dead. Smart zombies or rabies infected humans battle what’s left of those not yet bitten. Austrian director Stefan Ruzowitzky directs a nice cast that includes Dr. Who’s Matt Smith, Hunger Games and Game of Thrones beauty Natalie Dormer and Stanley Tucci who’s also a Hunger Games alumni among the veteran actors many other roles.

It’s a fast paced, action version of a zombie film that pits the intelligent infected against the uninfected in more of a war setting. A bunker setting and attempt to find a cure by capturing, and studying the infected is very much reminiscent of George Romero’s Day of the Dead. The bunker also helps to stay within a budget in their limited underground confines. A faster, more intelligent infected rivaling the uninfected in war like tactics is more like Romero’s Land of the Dead.

While Patient Zero mixes a lot we’ve seen in zombie movies before, it blends together well. I’ll always snark at a Hollywood beauty like Natalie Dormer surviving just as gorgeous in a post-apocalyptic bunker but that’s television for you. The cast, including Ms. Dormer are excellent. The film does focus on a longer lasting plot than just this movie with the only real culmination being the questioning of just who Patient Zero really is depending upon which side you’re fighting for. The lack of ending events is unsatisfying but with a sequel no doubt planned perhaps the elongated payoff will be worth it.