Review of "Truth or Dare" by The Headless Critic 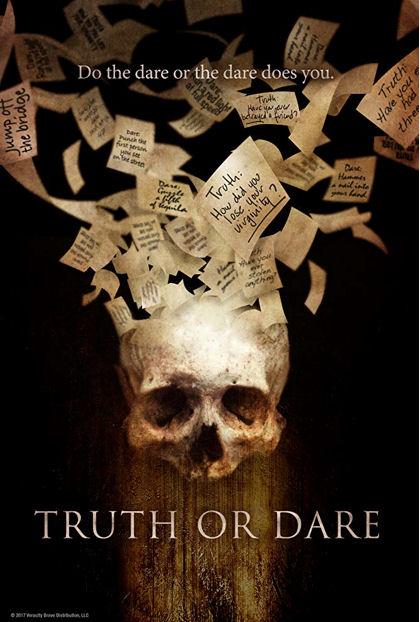 ScaryRentals.com has your haunted house rentals covered! It’s the perfect pre-Halloween Halloween thing to do! You want a real life haunted house to rent for your friends this weekend? ScaryRentals.com is your one stop shop for murders, suicides and even haunted accidental deaths. Rent out your favorite local home where someone was once brutally murdered!

Carter Boyle (Luke Baines) is a horror fanatic. He just rented out a fun, supposedly real life haunted house for him and his friends to spend a pre-Halloween weekend getting drunk and partying. He intends to keep his camera recording all weekend. Who knows he might actually catch something paranormal. The group of eight college are about to find out the horrors in this haunted house are all too real. This house has an affinity for the game Truth or Dare and unfortunately Carter knows the house’s history all too well. This game is played a little different. If you don’t do the dare the dare does you.

Truth of Dare is a game that lends itself easily to the horror genre as we’ve found out many times before including the similarly themed and exactly titled wide theatrical release of Truth or Dare in 2018 and the all too real and exactly titled Truth or Dare which would mark actress Jessica Cameron’s gory directorial debut. This version of the game is played by director Nick Simon who brought us The Girl in the Photographs, Removal as well as writing The Pyramid, let’s play.

Early introductions to a large group of eight college friends to die at first seems like a bunch of pretty, young and cliché Hollywood faces. As their deaths play out the characters actually develop in a gritty way you don’t see in other films. There’s even a properly used cameo by Heather Langenkamp. A Nightmare on Elm Street’s Nancy isn’t just thrown in there for her face. She’s cast in a role of importance even if it’s a smaller part.

Golden child and future surgeon Tyler (Mason Dye) is the pretty boy leader of the group who’s imperfectly perfect. Alex (Cassandra Scerbo) is Luke’s perfectly perfect girlfriend. Luke (Ricardo Hoyos) is the jock with a heart of gold if not some bad decision making. Jessie (Alexxis Lemire) is Luke’s new outsider, vegetarian girlfriend who’s meeting his group of friends for the first time. Maddie (Brytni Sarpy) is unlucky in love and untrustworthy with your boyfriend. Carter is the annoying horror nerd who got them all into this mess. Holt (Harvey Guillen) is your not so typical overweight geek who likes his meat and can’t drive for shit. Addison (Christina Masterson) is a costume party kitty who just wanted to do a séance.

The truth is, out of the three Truth or Dare movies distributed widely in the last year, Nick Simon’s is my favorite. If it had got as wide a release as 2018’s wide smiling Truth or Dare I think it would have been even more successful. Simon’s follows a group horror formula that’s very familiar but it’s familiar for a reason, because it works. Dialogue is often corny but unlike films before it or even after it of the same title, these characters have heart, are self-sacrificing and don’t all turn on each other at the first sign of trouble which is different and appreciated. Some of their dare decision making, like pouring acid over their entire head instead of just a bit, or severing a whole limb instead of a chunk of their foot doesn’t always make sense but overall they’re far more realistic that your out of touch Hollywood norm.