Review of "The Nun" by The Headless Critic 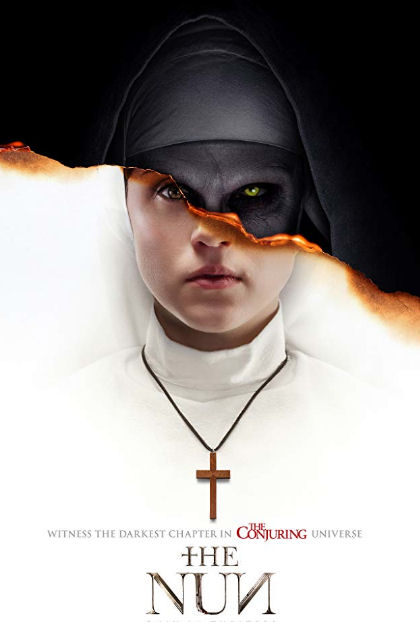 Cârța, Romania 1952, a nun at a Catholic Abbey hangs herself out the window of the isolated castle. Father Burke (Demián Bichir) and sister Irene (Taissa Farmiga) who has yet to take her final vows to become a nun, are sent by the Roman church to investigate. What they encounter is a malevolent force once locked away by the church that’s been unleashed and has taken a hold of the once religious sanctuary. In order to keep the demonic being entrapped within the holy grounds they must keep their sanity and their soul as they face off against the unholiest of spirits in the demonic Nun.

A priest, a nun and a French Canadian walk into a Romanian castle. The Nun is a second spinoff of the James Wan directed The Conjuring who provides the backstory to the haunting bride of God we’ve seen before in both The Conjuring sequel and spin-off Annabelle. The Nun is a force far greater than any we’ve seen before of course and she’s at the direction of The Hallow director Corin Hardy in his second feature. This round, the time jumping series takes us back to 1952.

All of The Conjuring and Annabelle films so far have been loosely based on true events and The Nun is no different. The supposedly haunted location where the film is set but not filmed is there near Transylvania for all of you horror haunts to visit. The locations used are dark, haunting and beautiful. Other than the brief attempt at CGI fire which always looks awful, the movie is visually flawless for a horror film. They use the perfect settings for such a faith challenging script.

Demián Bichir is a veteran Mexican actor who’s been around since the 1970’s, first getting my attention as “Bob” in Quentin Tarantino’s The Hateful Eight and he once again impresses here in his fatherly role. Though I couldn’t stop starring at the dual pierced earlobes, light make-up that’s noticeable and perfectly plucked eyebrows of a young woman in the 1950’s who desires to be a nun, Taissa Farmiga nevertheless plays wide eyed innocence perfectly.

The deep story from James Wan and Gary Dauberman has limitless potential within the settings, budget and subject matter of the film. Most of the exploration of faith, Catholicism, demons and the history of the Catholic Church is negated for the jump scares that The Conjuring series fans are used to. It’s not that The Nun isn’t good, it is. We’ve just seen the set-up already in four films as well as a similar set-up from the James Wan directed Insidious series. There’s so much wasted potential.

The visions the Nun hides behind could have been darker and grittier, instead they set-up jump scares that are predictable. Frenchie (Jonas Bloquet) is a likable character but his poor attempts at sexuality and comic relief for the film don’t work and aren’t needed. Everyone in Romania speaks English for some reason. The spitfire ending is a little too Rambo to be coming from a 1950's nun.

Complaints aside, overall it’s a nice addition to The Conjuring franchise. Any success at the box office will most likely breathe life into another series of movies. While The Conjuring films remain the best, The Nun is indeed a darker force to face than Annabelle.