Review of "The Dawnseeker" by The Headless Critic

The Dawnseeker – 2018
Production by: Pikchure Zero
Distribution by: Uncork’d Entertainment 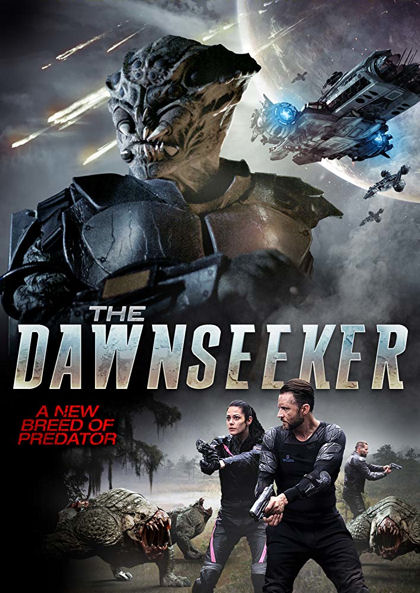 Earth 2248 : Our sun is dying, threatening the existence of all humanity. A group of mercenaries have set on a mission to an uncharted planet in hope of finding a rare mineral known as stardust that could help replenish our dying star. It’s the most important mission of their life. When their ship crash lands on an alien planet Earth’s last hope are hunted by a new kind of predator far more advanced than anything they've encountered before.

CGI robots walking over dusty ground leaving no imprint behind them, glitchy stop motion animation, CGI gun battles in paintball gear and an alien that’s a blatant rip-off of Predator. These are the wonders that make up Justin Price’s latest sci-fi feature The Dawnseeker. It's high school av club filmmaking at its best and nothing that should ever be distributed outside of their group of friends.

As a critic who’s notoriously harsh on budgeted CGI I’ll say this is unforgivable. I’ve seen better CGI used in youtube videos made by amateurs than the gun fight sequences in The Dawnseeker. Landscape and space settings from a distance look good but any time anything CGI related is viewed up close it lacks a lot of detail. Speaking of detail, simple things like footprints being left behind are forgotten attributing to everything unrealistic about the film that completely takes the viewer out of it.

Let’s forget the likelihood of creatures from another planet looking exactly like humans. I mean Star Wars did it assuming there’s an earth in the story set a long time ago in a galaxy far far away. At least Star Trek tried to differentiate their aliens even if it was pointy ears or a different shaped forehead. The Dawnseeker gives us humanoid aliens with southern accents and an alien creature that's not creative with a stolen look from the Predator.

CGI and logic overlooked, I actually think the majority of the actors are good. Elongated dialogue just doesn’t flow as a normal conversation. Storytelling here is just awful. Justin Price is an intelligent guy whose brain seems to work a little faster than most of us. Unfortunately this translates into confusion in his films that are hard to follow. Justin Price may be two steps ahead of the rest of us but if he doesn’t show us how he got where he’s going, his audience will be left in the dark.