Review of "Freaks" by The Headless Critic 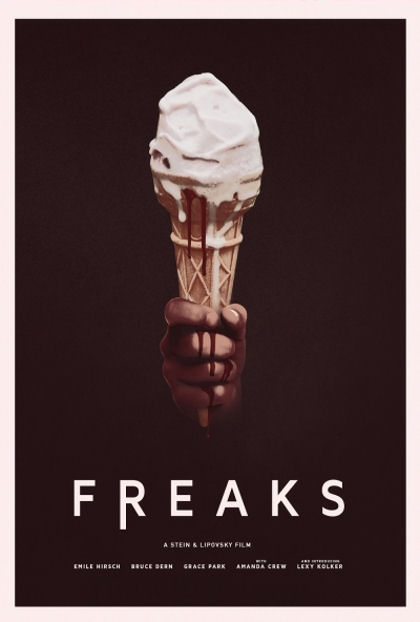 This is a story of The Snowcone and the Princess. Young Chloe (Lexy Kolker) lives alone in her house with her Dad (Emile Hirsch). Chloe’s never gone outside, Dad won’t allow it. She’s got to be a good hider so the people outside won’t kill her. He’s training her to act like normal people so they won’t kill her but she isn’t ready yet. Dad goes out sometimes but it’s just to get supplies. Chloe’s favorite supply is ice cream. Sometimes she can hear the music from Mr. Snowcone’s (Bruce Dern) ice cream truck just waiting for her out there. Ice cream isn’t the only thing calling Chloe to the outside world. Chloe wants a real mom, like Ms. Reed (Michelle Harrison) next door who bakes cookies for her daughter Harper (Ava Telek). Chloe does have a mom! She’s a ghost and she’s famous and she lives in her closet. Go away ghost, go away ghost, go away ghost!

This is the story of a very special, very brave young girl who finally opens the door to the wonders and the dangers of the outside world. She is then forced to face the very real world dangers within her own family. I can’t wait to be normal.

Freaks is a psychological mindbender from the creative minds of writing and directing duo Zach Lipovsky and Adam B. Stein, brought to you through the unique perspective of the world from a curious seven year old girl. It's a dark exploration of the dual possibilities of the reality you’re watching. At first it mirrors 2001’s Frailty but it evolves into something much different.

An excellent cast with exceptional performances includes veteran actor Bruce Dern and underappreciated gem Emile Hirsch. This film is stolen by the wonderful little fire starter Lexy Kolker. The seven year old actress mirrors a child Drew Barrymore in her cute smile and very impressive performance. The only thing more exceptional than her in this film is the turn of the script.

I was enthralled from the get go. Freaks came out of nowhere quickly impressing me with a complex but poignant tale. It feels like an early day M. Night Shyamalan film when he still topped the box office and it was more about telling a simple story than it was the twist. I feel if Freaks gets picked up for a wide release in theaters it will be a success at the box office. While not traditional horror it is one of the best horror themed movies I’ve seen all year. A top 10, I loved it!