Review of "Death Kiss" by The Headless Critic 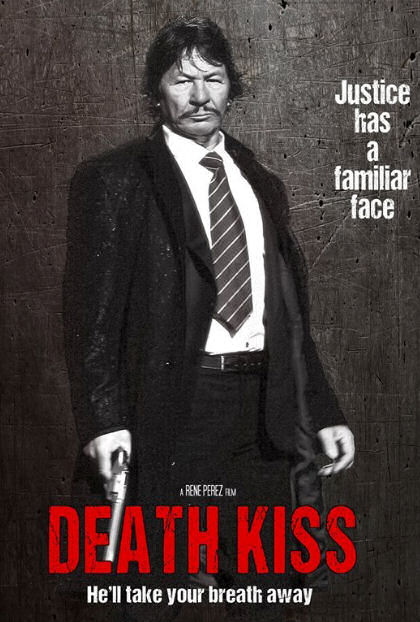 “You here for a cheese pizza?”

A crime spree is sweeping the streets in California and the criminals are the victims. The Stranger (Robert Kovacs) is cleaning up the streets. The lowest trash in the city is no longer safe. Murderers, drug dealers and child prostitution ring leaders are all meeting their end at the tip of his bullet. He’s taken over as an enforcer, doing the dirty work that law enforcement isn’t. “Justice has a familiar face.”

Charles Bronson is back! In the familiar face of look-a-like Hungarian actor Robert Kovacs. With action star Bruce Willis stepping into the shoes of Charles Bronson for the Hollywood remake of Death Wish, writer and director Rene Perez channels the real spirit of a Bronson film in Death Kiss. Why wish when you can kiss?

Eli Roth’s Death Wish is a well refined Hollywood production that to its credit doesn’t go overboard with unrealistic action, somewhat staying true to the source material of Charles Bronson’s most iconic role. The problem with that is Charles Bronson movies weren’t polished studio films. They were dark, gritty, 1970’s action movies with real world realism in character alone that audiences connected with.

Rene Perez captures the heart of Death Wish with his loving kiss to a film series that obviously grew up admiring. The casting of Robert Kovacs is eerie. The Hungarian actor nicknamed “Bronzi” because of his similar look to Charles Bronson is chilling. Like a Charles Bronson movie Death Kiss is darkly filmed, it’s gritty, it has elongated scenes that studio’s would have cleaned up. There isn’t some grandiose story that gets political. It’s a man with a gun getting revenge. Perez even put in the unrealistic bright red blood. It’s a brilliant homage and a fun movie.

For the movie alone, there isn’t much of a story. There are bad voice-overs for the Hungarian actor. There’s gratuitous nudity, needless violence, unanswered questions, continuity doesn’t seamlessly flow and neither does the film. They cast 80’s and early 90’s B-action movie co-stars Daniel Baldwin and Richard Tyson and they both perfectly fit their roles on a character level and a casting level.

Some will get it, some won’t. All these details aren’t a failure at movie making, they’re the reasons why it works. We’ll likely see Bruce Willis at the box office again before we see the next American made "Bronzi" movie. For me Rene Perez’s action feature is the true descendant of Death Wish. I haven’t seen a movie like it in over 20 years.