Review of "Apocalypse Rising" by The Headless Critic 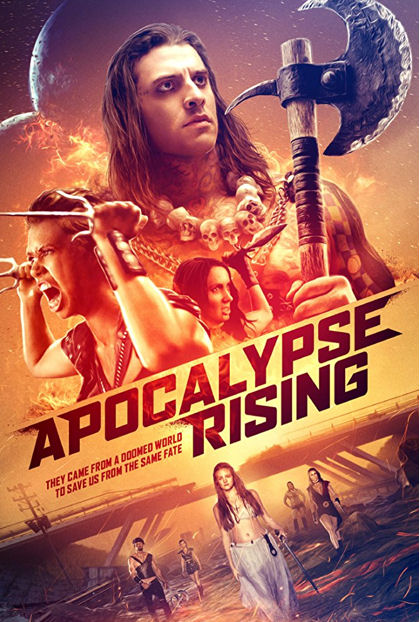 “In a distant galaxy, on a war torn planet, they will make a daring escape then be drawn by a mysterious force to a planet called Earth to shape our destiny and wage war against the forces of evil.” Earth has become a world of decay and wickedness. The sinful sweep the land, drawing innocent blood to feed their selfish needs. The bible foretells that, “Blessed are the meek: for they shall inherit the Earth.” Earth just so happens to be infested with the undead. The dead are preparing to rise. This is why he’s called them here.

A group of aliens looking like Hanna-Barbara’s Herculoids, escape their own war torn planet in hopes of procreating and replenishing the population of Earth. They land in a giant ship that looks like a cock with four balls, only to discover that our planet is doomed to the same fate as their own. A futuristic Earth, Herculoid aliens from another planet, zombies and the bible? Game of Thrones meets the Walking Dead in the Syfy epic of zombies and swords of biblical proportions.

Magnum (Shane Samples) is the warrior with a battle axe. He’s a fearless leader to those without fear. He is the Hercules, he is the Drogo. Thora (Victoria Steadman) is his Amazonian equal and mate to procreate. Phoenix (Justin Lebrun) is the cocky flyboy who can’t wait to use his skills on his child-bearer to be Beset (Johanna Rae). She can’t wait for it either. Mia (Hunter Alexes Parker) is the group’s telepath and the link between the future and the past. They come from the future looking like medieval barbarians of advanced minds.

This is a movie you make to launder money for the mob. This type of film is usually found with a pornography payoff for those who like a ridiculous story with their stroking material. I will give it this; at least it doesn’t take itself seriously. We always love a good decapitation at Without Your Head and it’s rare to see a self-sword decapitation by taking your own head as that isn’t easy to do. You just don’t see that every day, especially when the head lives on! It’s ridiculous and fun and maybe there’s an audience out there that will find the rest of this insane genre mix of movie just as entertaining.