Review of "Look Away" by The Headless Critic 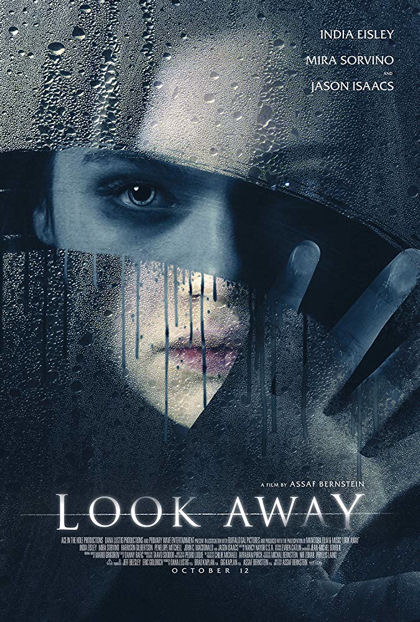 It’s not easy growing up with a father who fixes flaws for a living. Maria (India Eisley) is a lonely, anti-social, high school outcast who struggles with self-confidence as most teenagers do. Her father Dan (Jason Isaacs) is a cosmetic surgeon who tries to make everything perfect for a living. His solution to anything he can’t fix with a knife including his own wife Amy (Mira Sorvino) is to medicate the problem. With no real friends and a home life that isn’t designed to nurture a young girl who can’t cope with teenage life, Maria turns to her inner self to find the support she needs. Inside of all of us there’s another person just waiting to get out. Be careful of the suppressed feelings you unleash, they might just be deadly.

Have you ever kissed yourself in the mirror? Did you kiss back? Look Away is a study of the fractured mind of a teenage girl who broke like a cracked mirror under the pressures of high school adolescent life. Assaf Bernstein’s latest feature is a modern retelling of a story similar to a familiar Stephen King novel. This deadly tale of teenage angst is built heavily on its characters. The actors deliver in their performances.

Jason Isaacs plays a multi-layered father who cares about his daughter but is so messed up in his own mind he has no idea how to properly care for his teenage child. Mira Sorvino is a withdrawn mother we see about as much as she is in her daughter’s life. She too cares but finds it much easier to follow under the influence of a pill than to put forth the effort that matters. Even young John C. MacDonald plays a layered role as the antagonist who isn’t evil, just a teenager making bad decisions in the name of having fun without fully realizing the consequences of his actions.

The most important role that makes the film is that of Maria or Airam depending on which side of the mirror you’re looking at the doppelgänger from. I’m naturally against the casting of beautiful Hollywood starlets to play outcast girls. Chloë Grace Moretz is an actress I like but she never once fit the role of Carrie in the 2013 remake. Talent aside, some roles must be cast including looks as Sissy Spacek and Angel Bettis proved fitting their similar themed characters far better. India Eisley is absolutely gorgeous and I never would have thought she would fit a role like this so perfectly. With cracked lips, light make-up and dark circles under her eyes she’s able to transform from shy, anti-social, imperfection to sexy, seductive and scary in an impressive turn.

For a modern telling of story like Carrie of a tormented girl, Look Away takes a literal approach in the disguise of a fractured mind. I would even say it does horror themed dissociative identity disorder better than the 2017 hit Split, if not without the cool superhero ties. Horror fans who want to experience the agony of high school life for a teenage girl, Look Away does it as well as anyone has in horror since 1976.