Review of "Mail Order Monster" by The Headless Critic 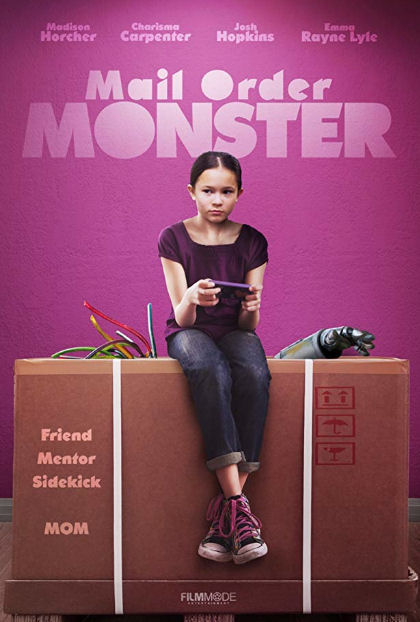 Since the death of her mother in a tragic car accident undersized Sam Pepper (Madison Horcher) has become a social outcast at school. Her best friend PJ (Emma Rayne Lyle) has become her worst enemy. The other kids call her “Smalls” and it’s become routine for Sam to come home with gum in her hair the other kids put there. It’s just been her and her Dad (Josh Hopkins) at home now. Her Dad seems to be forgetting about Sam’s mom as he moves on with his new girlfriend Sydney (Charisma Carpenter). With her Dad talking marriage and PJ pushing her in lockers, little Sam has had enough. She turns for a solution to her problems in a mail away ad she finds in the back of a comic book. What she gets in return is a friend, mentor, sidekick, MOM and monster.

Sam Pepper is an absolute endearing character your heart will go out to at the hands of child actor Madison Horcher. She’s adorable and heartfelt in her backstory and the role. The first third of M.O.M is a coming of age story of the little girl’s struggles in her every day adolescent life. When the intelligent young girl has had enough she turns to a mail order ad for a robotic monster in the back of her comic book.

“Get your very own mail order monster. Don’t be the schmuck who’s pushed around, don’t be the wallflower in the crowd. Frighten your enemies, amuse your friends. Send this add with $20 to Merlin’s emporium of monsters and magic.”

Once the ad is placed and the packaged delivered Mail Order Monster becomes more mom than monster. What starts as a coming of age tail turns into a children’s movie. First time feature film director and writer Paulina Lagudi creates a film both parent and child alike can enjoy. The M.O.M. robot itself is a bit childish to an adult but would fit perfectly as a Disney channel show. Afraid to make a bad guy in a modern PC society, this all-inclusive family feature overcomes more internal obstacles than real world. A horror fan such as myself would have preferred a little more monster in their mail but this may be an upstart introduction to monsters for your little ones.