Review of "The Witch Files" by The Headless Critic 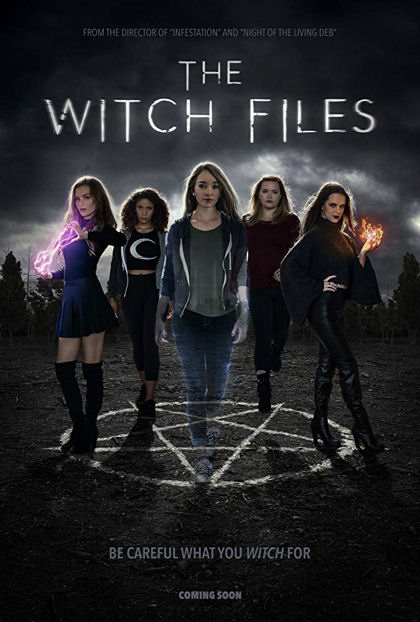 A group of pretentious teenage girls get detention with a witch. Impressed by the powers of a Wiccan, Jules (Britt Flatmo) performs two chants, bonding the girls, sealing the group of likeminded souls as a coven. “It’s not a click, it’s a coven, it’s a curse.” As Jules leads the group of novice witches in spells to obtain everything they desire, the girls learn there are dire consequences to getting everything you want. As their bodies begin to deteriorate, the girls turn on each other as their trust starts to wane. “Be careful what you witch for.”

In 2003 the second season winner of Matt Damon and Ben Affleck’s attempt to give back to up-and-coming filmmakers was Kyle Rankin. Since his feature film co-directing debut of Project Greenlight’s The Battle of Shaker Heights, Rankin has found a niche in horror comedies with 2009’s Infestation and 2015’s Night of the Living Deb. His latest horror helmed feature leaves the comedy behind for teenage angst.

A first person filmed high school horror drama, The Witch Files is Twilight for witches without the love story. The first person filming is barely noticeable which is a great compliment to Rankin as a director. The filming style is more television than feature film but never-the-less looks good even when a static camera is used to cover a lack of budget for effects. The coven of youthful actresses does a fine job incuding up-and-coming Tayla Fernandez, Sara Friedman, Holly Taylor, Tara Robinson, Adrienne Rose White and Alice Ziolkoski. I don’t think a middle-aged horror critic is the target demographic for these Charmed teenagers. A tween horror audience may find this one a little more appealing, particularly a female emo crowd.