Review of "3rd Night" by The Headless Critic 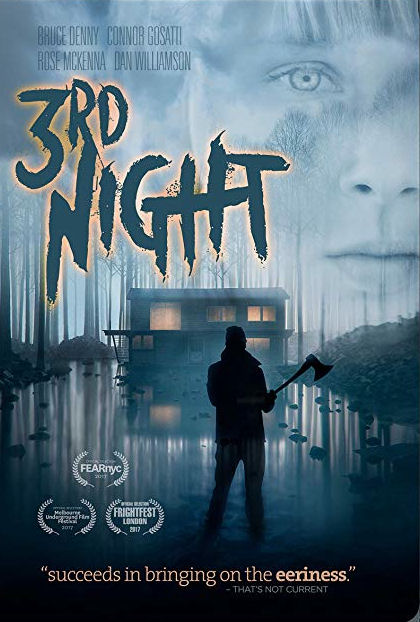 Deep in the Australian bush is a picturesque orchard home that any family looking to escape city life would be happy to live in. Deep in the Australian bush, the families that move into this picturesque orchard home die. This far out there’s no one to hear your screams. Jonathan (Robert Hartburn) and Meagan Reid (Jesse McGinn) have escaped their city life to the isolated farmland of their new orchard home. Congratulations on a real bargain. Here’s to living the good life, while it lasts… “Terror will come home”

“On the first night he’ll watch you play, he’ll lust for more and want his wicked way.” The first day in their new home even before all the boxes are unpacked the family cat Nook has gone missing. Something is out there in the bush waiting...

“On the second night he’ll make you stay, he’ll keep you warm you better run away.” Someone is leaving notes on their door, terrorizing them. The second night you’ll sleep soundly because he has a gentle touch as he caresses your body, quiet not to wake you while he watches you sleep.

“On the third night your time is up, he’ll beat you black and blue, daddy’s coming for you.” Her husband Jonathan is in denial. The local police think she’s overeating. Her cat Nook has been painted on the barn walls. Her cat nook has been cooking in their oven.

Short film director Adam Gravely brings us three parts to his first feature that’s more home tormenting than traditional home invasion. At times the movie feels like a forty-five minute short stretched into a feature. An intense atmosphere is created with the couple staying on edge the entire film. It’s hard to complain about realism in horror movies when horror characters are known for making poor decisions but when someone is leaving menacing notes on your naked body while you sleep it’s annoyingly illogical for the characters to stay.

The realtor is eerily desolate of emotion and I enjoyed everything to do with the cat from the painting of the barn walls to the cat mask. Children’s laughter and animal noises can be creepy but you need a child character, ghost or something more than the noises being used in the background as a score. With a few tweaks this set-up could be a continual series for the upstart director to work the kinks out of making another good slasher series out of Australia.