Review of "The Heretics" by The Headless Critic 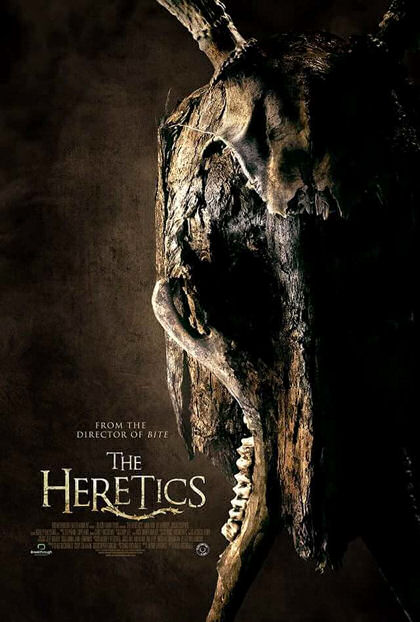 Kidnapped and bound she lays at an altar of self-sacrifice. Surrounded by believers she is bathed in their blood in a ritualistic offering of their own lives. Gloria (Nina Kiri) awakens five years later from this nightmare of her past in the bed of her girlfriend Joan (Jorja Cadence). The reality of what happened isn’t so easily left behind. Once again Gloria is kidnapped, this time by a mysterious man Thomas (Ry Barrett). As Joan searches relentlessly for her girlfriend the true reality of this nightmare slowly reveals itself in its decay.

A creepy movie cover well represents this eerie tale. A deep story of the ritualistic growing of a deity is brought into question by what is real. Something is happening as a woman slowly decays. Are the loved ones trying to save her really of good intentions as they grow increasingly more violent? Are those who hold her captive part of this evil plan or just happenstance?

Early on the story is a bit convoluted seeming amateur but with time all is explained. Nina Kiri transforms, decaying well. This isn’t a caterpillar to a beautiful butterfly transformation. A bald cap scene did bother me a little but I also loved the use of the black slime over her head, that the attractive actress wasn’t afraid to be seen as something hideous and the overall use of practical make-up and effects. To finish things off, experienced independent horror director and co-writer Chad Archibald gives us a befitting, abrupt, desolate ending. The Heretics is my first experience with this director who has quietly built a nice resume of independent horror features. I was impressed.