Review of "Krampus Origins" by The Headless Critic 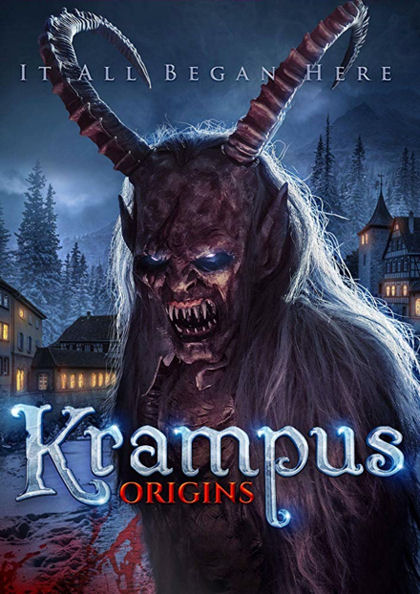 “And from this time being the age before the dawn of man, the spirits of old, the gods elemental power over the universe, the servants of the divine where the fairies had conjured a being of pure evil. They called this beast the Krampus.”

Amidst the heart of World War I, a group of soldiers find an ancient artifact and unknowingly unleash a monster. The artifact finds its way to one soldier’s widow Josephine (Katie Peabody) who just started her new teaching job at an orphanage. The orphans are about to accidentally wage a different kind of war. Unbeknownst to them the kids call upon an evil older than all of mankind. Now a teacher and her orphaned pupils must battle the Krampus.

A new child Nicholas (Chandler Mantione) has arrived seemingly out of nowhere to the orphanage. Now people at the orphanage are falling victim to terrible fates. It’s Christmas Eve and a reindeer’s clatter can be heard on the roof. Something is coming, but it won’t be sliding down the chimney because it’s already in the house. “It all began here.”

Actually it all began with the 2015 wide theatrical release of Krampus. Since then numerous low budget horror movies have been released straight to VOD under the Krampus name to make potential viewers think they’re possible sequels, they aren’t. Krampus Origins is actually a sequel to two of those numerous other VOD movies Krampus: The Reckoning and Krampus Unleashed, under the writing hand of low budget horror veteran Robert Conway. This is the first of his trilogy he didn’t direct turning over the reins of Krampus’ slay to Joseph Mbah.

With any period piece film I expect to have my disbelief of the time suspended, even if it’s done on a budget. Sets and costumes were accurate enough if not mildly over-sexualized. Working with a group of kids on the other hand is hit and miss. Some of the child actors suspended my disbelief that they could be from this era like Henrietta (Amelia Haberman), Adelia (Anna Harr) and Bram (Luke Waxman). Other children acted like they could go from delivering lines to watching YouTube. Some of the adult actors did as well.

Halloween isn't even over and we're already setting our sights on the horrors of Christmas. The origins of this Krampus tale are occult creepy but Krampus himself makes barely more than a seven minute cameo. Fiery eyes and a mouth that doesn’t move to the words spoken are annoying but I do enjoy this Krampus much more than a CGI abomination. His dialogue still needs some work. The end of this Christmas could’ve used that one last big gift to open but this is an origin story to two sequels already made.