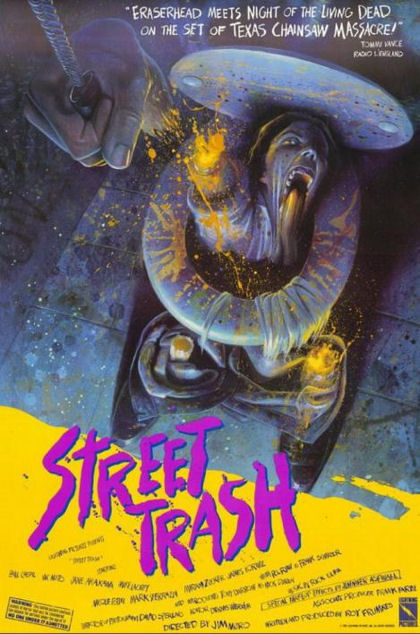 A greedy liquor store owner looking to make a buck, literally a buck a bottle, sets out an old case of discontinued liquor called Viper he found that was stored away in the cellar decades ago when the product was pulled from shelves. Marketed on the cheap to the homeless population looking to get a fix, these old bottles of Viper have a messy side effect melting the bodies of those who drink it into a bright gooey mess. Walk the streets with the trash of New York as they go head to head with sociopath hobo bully Bronson (Vic Noto), flatfoot detective Bill (Bill Chepil) and of course the stomach churning, gut spewing Viper!

Every year on Halloween I like to find a movie from the 70’s, 80’s or 90’s that I somehow haven’t seen. This year’s lost find is Street Trash. This is an 80’s Troma movie in every way only it’s not made by Troma. This is a film from the dirty days of New York and an era and style of moviemaking that can’t be duplicated today. It is comedy gold if you lived in the era and you get the comedy. It’s probably unwatchable if you don’t.

Actor Roy Frumkes who wrote one of the most underrated action movies series The Substitute and directed a series of documentaries on George Romero’s classic zombie films also wrote this little homeless goop epic in the heyday of 1980’s New York. It’s absolutely nothing like his other work.

James M. Muro, a camera operator of many top films over the last four decades including The Abyss, Titanic and many top action movies also directed one feature, Street Trash, before moving on to directing several mostly action related tv series. At least in his early days Muro worked with similarly themed directors to himself like Gregory Lamberson on Slime City, Frank Henenlotter on Brain Damage and William Lustig on Maniac Cop.

Everything about Street Trash is cheap, cheaply made and what most would consider awful. I loved every minute of it! Burt (Clarenze Jarmon) stealing from the grocery store is a very long, very unneeded scene that does nothing for the progression of the movie and besides the melting bodies it’s the most enjoyable part of the film. I laughed at a homeless man Fred (Mike Lackey) losing the only three dollars he had and I didn’t even feel bad about it. I verbally yelled at the television, wanting to see the fat man (Eddie Bay) drink the Viper and decompose in mass quantities. I was rooting for the necrophiliac, rapist Frank (Pat Ryan) to have his way with the body he found washed ashore.

Few movies come along that are this fun. Few movies come along where a man like Paulie (Bruce Torbet) can flush himself. “Things in New York are about to go down the toilet…” literally. And I’ve never seen another movie play keep away with a severed penis. If like me you somehow missed this gem of the 80’s and you like the schlock of Troma style filmmaking, Street Trash comes with my highest recommendation. “If you've never seen a melt movie before.... be prepared!” Prepared for a molten hobo holocaust!