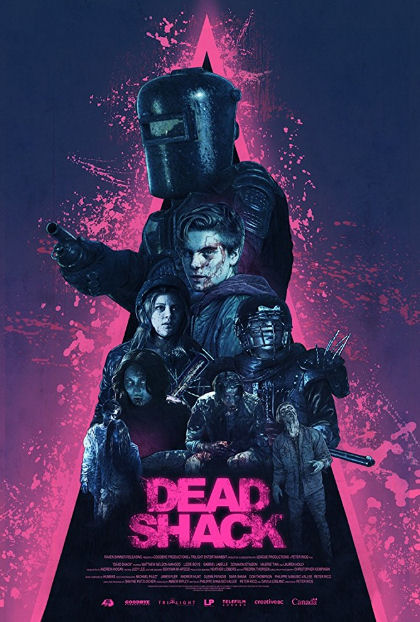 A family retreat to a cabin in the woods turns deadly. Who would have thought? Three barely teenage kids Jason (Matthew Nelson-Mahood), Summer (Lizzie Boys) and Colin (Gabe LaBelle) discover their temporary Neighbor (Lauren Holly) who lives in the house just through the woods is killing people. The boys she seduces into her home never come out. Like any good group of television teen sleuths, the kids decide to break in and free her captives, if they’re still alive. What they find inside is a feeding frenzy of the undead. Neighbors do battle in a fight for survival. One family is hungry and the other is food that fights back.

A group of kids show television writers Peter Ricq, Phil Ivanusic and Davila LeBlanc get crowd funding to create a horror comedy that’s a little too adult to be for kids. Zombies are overplayed in Hollywood right now and a group of kids as protagonists in horror movies is quickly catching up. Neither bothered me here because it’s original in its zombies, “When the blood is black there’s no going back.” It’s only a zombie movie by technicality. The story also doesn’t work without these kids.

Though it’s definitely not a “kids movie” by definition, I feel the comedy is a little annoying to me because it was made for a younger audience. The alcoholic father of the film Roger (Donavan Stinson) is an unbearable drunk. Through no fault of the actor, this is a role that could have been played by Zach Galifianakis or Will Ferrell and you either like the type of over-the-top characters those actors play or you don’t. Young Gabe Labelle is another comedy relief role that just doesn’t work for me. Though I did enjoy seeing him kill his dad’s girlfriend Lisa (Valerie Tian) and watching him urinate is one of the best scenes in the movie.

The effects are kept practical, the blood flows like water and the head explosions are plentiful. The most experienced actor with the biggest name, "she-bitch" Lauren Holly is a motherly badass, who's providing for her family whatever the cost. The concept is an excellent one. When the kids gear up the save the day the film is outstanding. I like the realistic costumes and the progressively worse situation as the night goes on. The comedy is largely lost on me. An adult swim younger crowd who know the names of YouTube celebrities might find they like this one even better.