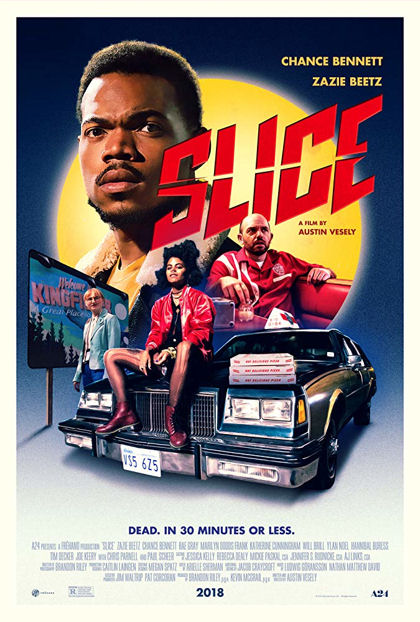 “I’m going to tell you a story about a ghost, a werewolf and a pretty shitty pizza place.”

It all started when the werewolf came back to town. In a world where witches, werewolves and the undead co-exist among humans, tensions are higher than any racial situation could have ever created. When a pizza delivery boy is murdered while making a routine delivery, a werewolf is profiled as the prime suspect. Perfect Pizza may not be so perfect as their employees keep dying. A city on the brink of lynch mob warfare, a political agenda covering it up, someone is out killing the citizens of the town of Kingfisher. This plot goes deeper than anyone could imagine, far deeper.

“Dead. In 30 minutes of less.” Forget the misleading movie posters that spotlight Chance the Rapper for his name value in this supporting role in an ensemble cast. The hilarious trailer with its 90’s fabulous opening line is the true representation of what this slice of horror comedy is all about. After directing a few videos for Chance the Rapper, Austin Vesely writes and directs his first feature film. A few shortsighted marketing flubs aside it’s a hilarious concept with some fun scenes and excellent dialogue.

When the undead came back, Mayor Tracy (Chris Parnell – SNL) saved the town by segregating the city into two halves, the living and the undead. Reporter Sadie (Rae Gray – Fear of the Walking Dead) isn’t so sure everything is as peaceful as the politicians make it seem. Along with her makeshift cameraman Jackson (Joe Keery – Stranger Things) they head an investigation that leads them to Jack’s (Paul Scheer – Adventure Time) Perfect Pizza, where nothing is perfect especially the pizza. Teaming with a werewolf Dax (Chance Bennet) and recently deceased street thug Astrid (Zazie Beetz) the unlikely group find what’s really lying underneath the surface of the city.

Drug deals and horror monsters in a shtick, spoof, satire comedy with a 90’s theme and some fun dialogue. A lot of topping are thrown onto this pizza. At times it feels like something that should’ve been found on Adult Swim and not in your local theater. It's an odd mix of ingredients that shouldn’t work together but you're still enjoying the taste of this oddball combination Slice that at times hits notes of awesomeness. I’m even willing to forgive the budgeted CGI when that’s usually one of my biggest pet peeves in horror movies because in this comedy it fits the script.