Review of "Overlord" by The Headless Critic 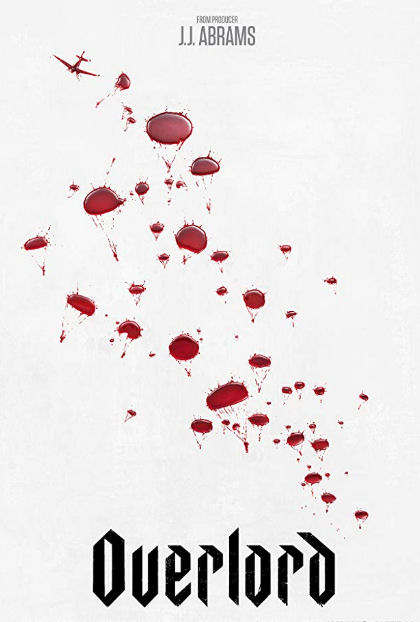 June 5th, 1944, a unit of American soldiers are dropped into the middle of Nazi controlled France. Their assignment is to destroy a church radio tower, a crucial mission that must succeed to help the chances of the pending D-Day invasion. With most of their planes shot down on entry a small group of surviving paratroopers have only hours to complete their vital mission. The soldiers find that the Third Reich is using this holy place as more than a way to send communications from Berlin. Deep in the depths of this Nazi basement a mad doctor has been experimenting with reanimating the bodies of the dead. As our boys move in undead Nazi’s fight back, welcome to France.

Hells Bells leads an exciting action packed trailer for a film with slick name simply titled Overlord. A marketing ploy from producer J.J. Abrams’ Bad Robot production company that’s sure to get audiences excited to see this feature. A bit misleading, the film itself is actually a well-crafted story tackling a plotline with a wealth of possibilities in Nazi experimentation during World War II. The idea of the film comes from creative mind of Abrams with two well-versed Hollywood writers penning the screenplay in Billy Ray (Captain Phillips) and Mark L. Smith (The Revenant).

Reality in this period peace horror war movie is only glimpsed. It isn’t the zombies in the basement that bother me but more the Hollywood movement to be politically correct even if it’s in vein of history and realism. Segregation of the U.S. Army Paratroopers is dissolved, Nazi’s are a rapey cliché with kickass flamethrowers and your token soldier with a New York accent makes roll call. Female empowerment is represented but she’s French during World War II so I’m not going to call that one unrealistic.

Corporal Ford (Wyatt Russell) is the ranking officer in a ragtag group of Paratrooper survivors. He has the on ground experience of the group and the quiet distress of war to go along with it. Tibbett (John Magaro) is your token New York accented asshole with a heart of gold required for every war movie squadron. Jacob Anderson (Dawson) is your token actor who’s been in The Game of Thrones that’s required for every movie trying to get a wide theatrical release. Private Boyce (Jovan Adepo) holds modern day morals as a black man in 1944 America. Wafner (Pilou Asbaek) is a typical rapist Nazi German with no redeemable value. Chloe (Mathilde Ollivier) is your Hollywood required female sex appeal. Dr. Schmidt (Erich Redman) may be the most cliché character I’ve seen in film this year. He’s the side character I’d expect from a 1940’s American superhero comic.

Cliché characters and a lack of realism aside the story is actually good. Nazi experimentation could be so much more than Overlords produces but for an action horror movie with a video game feel it stays fun. Likable characters are few and far between. Private Boyce is the lead character but by the time he steps up to fight this war he’s proven himself so hesitant in the face of danger he isn’t much of a hero. Corporal Ford is the most redeemable character but he meets the fate you’d expect him to meet from the moment his feet touch the ground.

With similarities to the Resident Evil video game with a group of soldiers dropping in on a house of reanimated corpses, Overlord is the zombie flick the Paul W.S. Anderson movies failed to be. It may not be the action packed, start to finish thrill ride the Hells Bells trailer alludes to but there’s a lot of action and good use of CGI drawing from a good story that’s just done to stereotypical Hollywood to be anything deeper than wide appeal popcorn fun.