Review of "Soul to Keep” by The Headless Critic 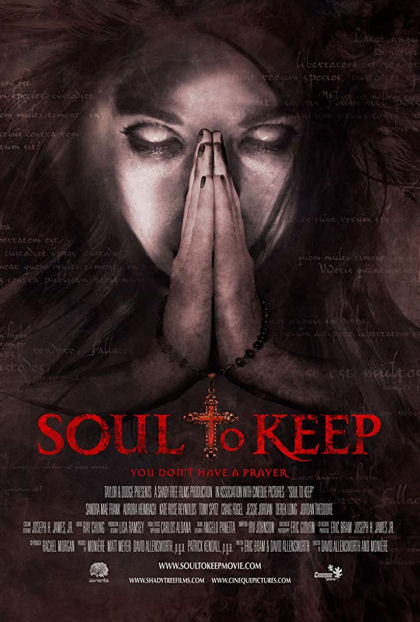 “Love is a familiar. Love is a devil. There is no evil angel but love.” – William Shakespeare

Twins Erin (Aurora Heinbach) and Josh (Tony Spitz) have just inherited their Grandpa’s family farm. To honor their deceased Pop Pop (Brian Donovan), the siblings invite their six friends for a weekend of binge drinking and getting high. Exploring the basement that terrified them as children the friends find a spell book that can summon a demon named Beelzebub. Bored without cell service or internet connection and not taking the dark arts seriously, the Wiccan of the group Grace (Kate Rose Reynolds) is chosen to summon one of the seven Princes of Hell. As the demon goes from body to body, they may have to kill if they want to make it out alive.

Oops, we summoned the devil. David Allensworth with his co-writer Eric Bram and co-director Moniere gives us a familiar low budget horror set-up isolating a group of friends at a remote location. The characters are also somewhat familiar. Twins Brandon and Erin sing made up songs in unison as they disgrace their grandpa’s home. Freddy (Craig Fogel) seems to be paying homage to group character horror movies before him like the early days of Friday the 13th with stereotypical comedy-relief stoners. Toby (Derek Long) is actually a refreshing realistic stoner. Brandon (Jordan Theodore) is your typical jock dating your not so typical Wiccan. For all intents and purposes Kimbo (Jessie Jordan) seems to be a token character which is sad to say as the actress does well in one of the films smallest roles.

Some of the characters may be familiar but unlike most horror films this group of friends is somewhat realistic with several built in dynamics already working within the group. One of the films greatest compliments is working deaf actress Sandra Mae Frank (Tara) into the script making it a part of everyday life for the characters and not just an exploitative plot point. Focusing on the group and the characters strengthens the movie. Not following all the typical horror clichés especially in the films ending is also a plus. For me the set-up is just too familiar and the CGI would’ve been more fun done practical. A fun watch Soul to Keep adds a few new things that are worth checking out for horror fans who want to get something they don’t fully expect.