Watching Movies - The Hills Have Eyes

Review of "The Hills Have Eyes" by Jason Minton 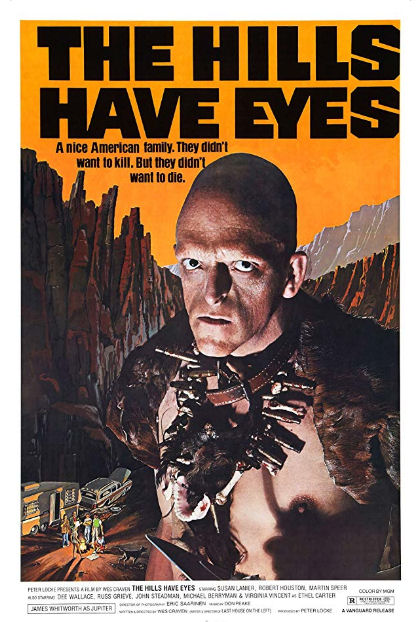 A family vacation to see the movie stars and fast cars of Los Angeles gets misdirected while detouring to see an attraction in the Nevada desert. When their car breaks down under the blistering heat, the Carter family will be lucky if they’re not turned into French fries, human French fries! French fries might have been a better fate. These desert hills have hungry eyes. Cannibals living in the desolate location are watching a camper trailer full of food pull up to their front door. “The lucky ones died first…”

In 1972 an aspiring film director came from the pornography business to make a movie that was largely deemed too volatile and something audiences didn’t want to see. After toiling for years with where to take his career next, someone convinced Wes Craven to follow-up his first feature film with what he does best, another horror movie. With the lack of success of Last House on the Left, Wes mimicked the most commercially successful horror film of the time The Texas Chain Saw Massacre, drawing inspirations from the true story of cannibal Sawney Bean and perhaps even Deliverance. The result legitimized the films of the man who would go on to become a horror legend.

Inbred, deformed hillbillies in the Mojave Desert? As a southerner I’m offended! Overacting that was prevalent in most movies of the era is offset by the dark, raw filmmaking and the early day pushing of the envelope by Wes Craven. Rape, murder and cannibalism make for brutality that’s found in the script and not just the gore. The movie also launched the horror film careers of icons Dee Wallace who gives the films standout performance and Michael Berryman whose unique look is perfectly fitted to the genre.

For forty years The Hills Have Eyes has stood as cinema’s most terrifying representation of the deformed, killer, hillbilly. I still believe inbred hillbillies is a concept that has much more potential than we’ve seen fulfilled in horror movies. That baby tenderloin though, I bet it tastes good…

WYH Interview with Dee Wallace of The Hills Have Eyes!


WYH Interview with Michael Berryman of The Hills Have Eyes!


WYH Interview with Michael Berryman of The Hills Have Eyes!