Review of "Dead or Alive" by Jason Minton 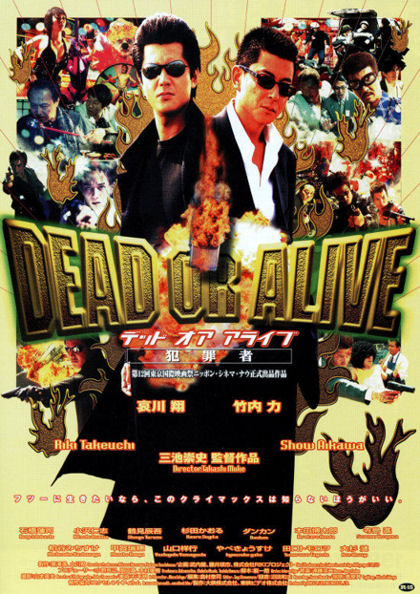 In a Yakuza controlled Japan, the only thing stopping those of power from sinking to the worst immortalities of humanity are them governing theirselves. When a lawless faction headed by Ryuichi (Takeuchi Riki) defects from the Yakuza with plans to overthrow both the Japanese and Chinese mafia, all humanity is lost. Detective Jojima (Aikawa Sho) is the last man standing between a civilized society and all hell breaking loose.

If there’s one thing I can say about Dead or Alive it’s that there’s no depravities the film won’t sink to. From bestiality to drowning a woman in a kiddie pool full of her own enema because she laughed at her killer’s small penis, shock value in Dead or Alive is more prevalent than ridiculed American films. I’m sure that no animals were actually sexually abused even in Japan for the making of this movie but the dog squelching when picked up to have sex with a woman was enough to lose my interest.

“Pumped full of smack, fucked by everyone, bathed in shit from your own enema… Can you see God?” I personally like films crossing lines but to do so just for shock value really has no meaning. I’ve enjoyed several Japanese horror films including director Takashi Miike’s Audition but this isn’t one of them. Perhaps it’s lost in translation but I didn’t find much of a story to enjoy. Plus as much as I enjoy a man ripping his own arm off, that final battle is kind of shitty, no pun intended. Well that’s my review of Dead or Alive, “Sorry it’s so small."