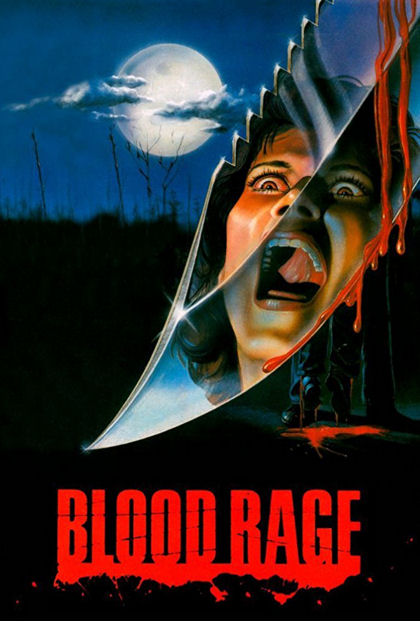 In 1974 a young boy Terry (Keith Hall) slaughtered a teenager (William Fuller) with a hatchet at the Route 35 Drive-In in Jacksonville, Florida. His twin brother Todd (Russell Hall) witnessed the brutal act shocking him into catatonia. The young murderer covered his twin in his victim’s blood placing the murder weapon in his catatonic sibling’s hand.

For the last ten years the wrong brother has been institutionalized while his evil twin Terry (Mark Soper) has been living a normal life, waiting... After a decade of working with a therapist Todd (Mark Soper) is finally remembering the event of what happened. Determined to prove his innocence, Todd escapes his institution on Thanksgiving rejoining his family. His return sets off a killing spree that will reveal the dark secret that’s been hiding in this family for over a decade.

A “lost” 80’s slasher set at Thanksgiving with an evil twin, a hatchet to the face and some incest. What more could you want in a holiday horror movie? Horror movies and holidays go together like machete killers and the woods. Thanksgiving is an under-utilized holiday for horror. In fact barring killer turkey’s both possessed and slashers, John Grissmer and Bruce Rubin’s Blood Rage might have been the best Thanksgiving movie for over a quarter of a century.

Blood Rage has good practical effects that will be fun for any horror fan. The premise of catatonia is ridiculous and the simplicity of an evil twin is a very 1980’s Dallas soap opera storyline. The overall idea of an abused boy going crazy has good fundamentals. The execution is just very over-the-top even for the time period creating a soap opera horror movie. What can I say, some things not even a mother’s love can save and that’s not cranberry sauce.