Review of "City of Gold” by The Headless Critic 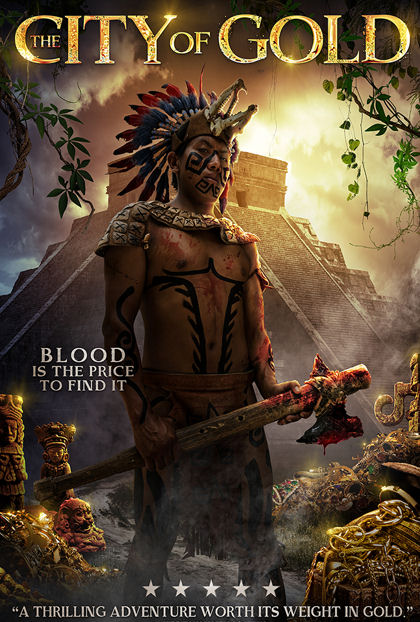 Jonathan Davenport (Robbie Allen) is haunted by demons inside him. The dark side of Jon Davenport is letting itself out in masochistic sexual behavior and he has the scars on his back to prove it. The demons living inside Jon have ruined the relationship with the love of his life Elisabeth Carlisle (Riley Dandy). After the suicide of Jon’s media mogul father Richard Davenport (Christopher Atkins) Jon has been deemed psychologically unfit to take over the family business. Looking to escape from the realities of the world, Jon follows his lost love Elisabeth on a mission into the jungles of Peru in search of a brilliant but reclusive artist Jorge Escamilla (John Charles Meyer). What Jon finds deep in the Amazon is an ancient secret, unleashing the demon inside and his true calling to El Dorado, the lost City of Gold.

Did you notice how many times I used the name of the films protagonist in the synopsis paragraph? Did it get annoying? Wider shots of the scenic jungle were painfully underutilized. Otherwise cinematography, sound and lighting are done well. Some actors are miscast or perhaps misdirected by Harry Locke IV but nothing too off-putting as other characters are cast perfect. Several roles are stereotypical. There’s a group of mercenaries who like to throw things to each other and do mercenary things like take knives out of their holster for no reason and adjust their guns. They also feel more like a cast that should be in a Predator movie than the most recent Predators movie. It gives the film an action movie feel but also at times feels like a parody of action films the characters are so stereotypical. Lines like, “You lost American?” said in the most American accent is an excellent example. The Spanish Inquistor played by the very white Australian actor Vernon Wells of Mad Max 2 and Commando is another tendency toward a vague parody. Besides being very white, Vernon Wells actually gives one of the best performances and otherwise fits the role well. It's also good to see Branscombe Richmond who hasn't aged since I last saw him in the 1990's independent tv series Renegade. Other scenes like the wide eyes of the cameraman filming an attractive woman on a motorcycle make the film feel like someone was trying to subtly create a comedy.

The no budget, poorly acted, filmed in black and white to cover its flaws movie Clerks prove that well written dialogue is all you need to make a good feature. The opposite is also true. Without good dialogue it's almost impossible for a good movie to exist. The dialogue in City of Gold has the lead character Jon Davenport’s name said no less than 112 times in the one hour and thirty-seven minute runtime. From the opening scene until the end credits roll, a version of Jon, Jonny or Jonathan is said on average of every 52 seconds. Some instances are even poorly voiced over in post production. It’s completely distracting from the mildly over-complicated story of the search for the City of Gold with a sub-plot of cursed possession. If Jon’s name was written in the script that many times, I have no idea how anyone who read it didn’t ask writer Ronald A. Blum for a rewrite. I can go days in a city of people without hearing someone call me by my name, 112 times in an hour and a half is unrealistic and absurd. It’s all consuming and if the right person besides me comes across this movie, it may become Youtube famous for how ridiculous this is.