Review of "The Harrowing” by The Headless Critic 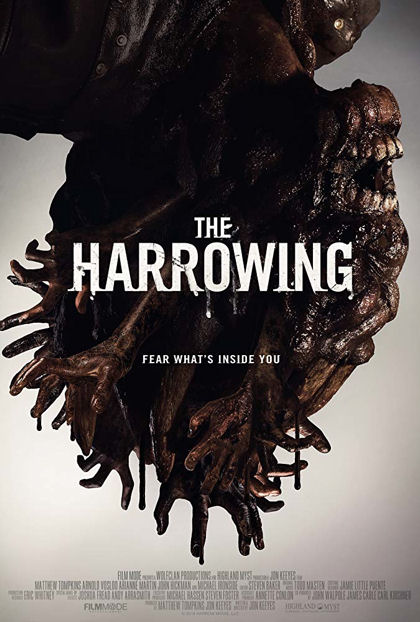 “What’s the best thing about banging twenty eight year old girls? There’s twenty of them.” Vice detective Ryan Calhoun (Matthew Tompkins) was on an undercover sting investigating a group of perverts trafficking children as sex slaves. He only stepped away from his partner for a minute to call in for the bust. A minute was enough to lose his partner and forever change his life. Years later while on surveillance history repeats itself. While Ryan is out for coffee, one of his surveillance partners Roy Greenbaum (James Cable) brutally murders his other partner and lifelong best friend Jack (Damon Carney). Believing Greenbaum’s stay in a mental health hospital has something to do with the ritualistic killing of his friend, Ryan goes undercover once more.

Deep inside a forensic hospital Ryan goes undercover as a patient under Dr. Franklin Whitney (Arnold Vosloo) to investigate the “demons” Greenbaum said he has living inside him. Under Dr. Whitney’s care Ryan begins to question his own sanity and the only person who knows he’s actually undercover and not a patient is his boss Lt. Logan (Michael Ironside). Was Greenbaum possessed by a real demon, or has Dr. Whitney brainwashed his patients into a murderous insanity? “Fear What’s Inside You”.

Hollywood veteran Jon Keeyes brings us a harrowing psychological thriller. The writer, director creates a well versed movie we’d likely have seen in a wide theatrical release in the late 90’s or early 2000’s before Hollywood was completely overrun with blockbuster features and “who you know” films. I mean this as a great compliment; The Harrowing is theatrical worthy, better than half the options you’ll find at your local theater today. Matthew Tompkins is a likable actor and character who portrays pervert, cop and crazy all within one film. One emotional scene with Arianne Martin was literally hard for me to watch for all the right reason. For film fans longing the thrillers you used to get in theaters, The Harrowing gets my full recommendation as the movie you've been missing.