Review of "Mute Date” by The Headless Critic 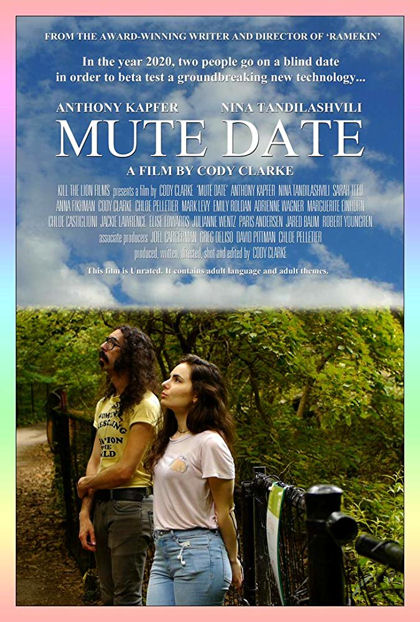 By the end of 2020 Teller laboratories will have a monopoly on an entire sense, telepathy. Answering an ad for an experimental study, two strangers, a peach Erica Peters (Nina Tandilashvili) and the Women’s Wrestling Champion of the World Noah Gutman (Anthony Kapfer) agree to take part in a drug induced blind date. After signing extensive contracts that includes non-disclosure agreements, they both take a BETA drug that gives them the ability to communicate with each other through their thoughts while making verbal communication no longer possible. After all the best way to get to know someone is to get inside their head isn’t it? They should have read the fine print... The date will last four hours in the confines of a local park. The implications of this experimental drug may have far greater implications on the world than helping lost people find love.

Musicial comedian Anthony Kapfer and New York based stage actress Nina Tandilashivili mime what’s basically a two person show. The film is built on the two actors mimed performances and it surprisingly works. Voice-overs let the actors communicate with each other while the world continues around them oblivious to their telepathy. It’s a unique take on the dating scene with a lot of social commentaries as Erica and Noah get to know each other as well as the company that produced the pill they both just swallowed. Under the microscope is big pharmaceutical at its highest level as well as our overly PC world and social media policing us by being able to punish its users via restrictions of their services that have become ingrained in our everyday lives.

Undiscovered filmmaker Cody Clarke follows what was one of my favorite films of 2018 Ramekin, with another dialogue driven budget-less feature. Clarke has proven himself a modern day Kevin Smith with dialogue heavy films that may not look the best or have the most complicated script but deliver on entertainment through written word alone. Unlike the Clerks director, Clarke just hasn’t been discovered yet. If anyone ever gives this man a budget, I’ll be in the theater to see what he can do. While not of the horror genre like Ramekin, Mute Date is another Cody Clarke film that’s far better than almost anything you can buy a ticket for at your local theater. It’s a realistic engaging of social dating in the most unlikely of forms.