Review of "Cherokee Creek” by The Headless Critic 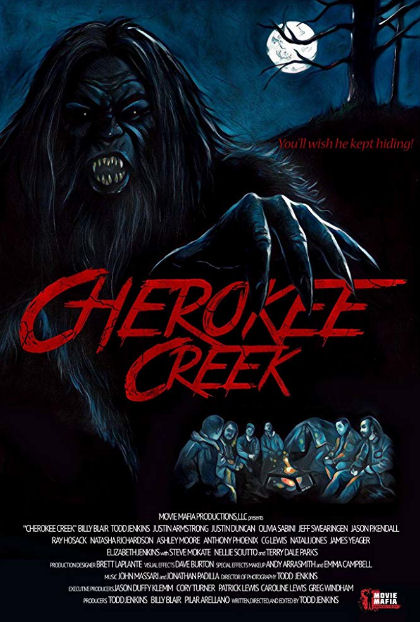 Jinx (Todd Jenkins) and Vinny (Billy Blair) just wanted to give their good friend Pat (Justin Armstrong) one last memorable night before he puts that ring on her finger and ruins his life forever. Ok, this bachelor party is really for the miserable bastards like Jinx who hate being married and the single guys like Jarrett (Justin Duncan) who have nothing else. They still did it right, kidnapping their best friend and scaring him to the point he thinks he’s going to die. Controlling bride to be Caroline (Olivia Sabini) would only allow her pussywhipped fiancé Pat to go on a camping trip with the boys in the woods. Jinx makes sure it’s deep in the woods, so deep Caroline will never know about the strippers, beer and Bigfoot. Did I just say Bigfoot? There are "No Trespassing" signs in Cherokee Creek for a reason. This is Bigfoot’s woods, enter them and “You’ll wish he kept hiding.”

With jokes as juvenile as a teenage boy’s sense of humor, six friends head into the middle of the woods for a bachelor party. Any forty year old man should long have found the “myth” of the female squirter, but maybe these guys just need to work on their technique. That doesn’t stop two strippers Lacie (Ashley Moore) and Bambi (Natasha Richards) who has some sweet knee tatts, and a Park Ranger (Nellie Sciutto) from following the boys into the woods. They’re not the only thing following…

Their runtime may have went a little too long as some jokes get over played but Cherokee Creek is an independent film made “their way” as their intro and exit will tell you. In fact they got banned from Amazon due to the films crude content. It’s a horror comedy that doesn’t hold back on the dick jokes, literally. Actor Todd Jenkins bares all as he directs his first feature that’s co-written by Billy Blair. It’s these two actors playing off each other and the dialogue between them that make this Bigfoot movie a success. They have a chemistry that keeps it entertaining even when some of the later comedy in death becomes a little too corny for my tastes. I have to admit Cherokee Creek got more laughs out of me that any comedy hit playing at your local theater.

We here at Without Your Head always support a headless decapitation, even if that head is attached to a penis and not a neck. There are no less that two penile removals in this film and that alone will get my full recommendation to check this one out. Not to mention a decapitation of an actual head with a dick in its mouth. Can you say two head in one? What more could you ask for! The effects are practical and fun to watch for any retro horror fan. If it finds the right audience I could see Cherokee Creek becoming this year’s underground hit horror comedy like Tucker and Dale vs Evil was for 2010. It's cheap independent horror fun.

Banned from Amazon, Available Everywhere Else on VOD