Review of "Doom Room” by The Headless Critic 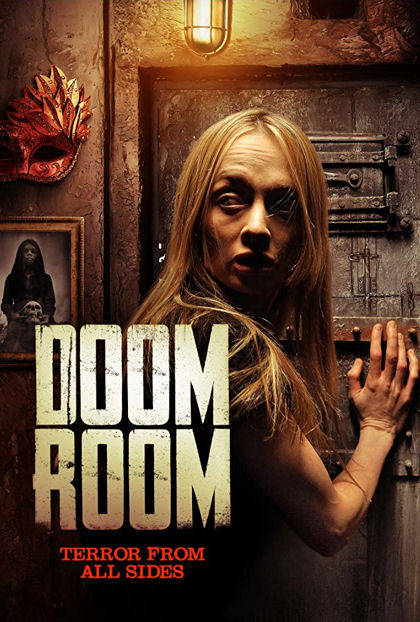 Down the rabbit hole we go, where we stop she certainly doesn’t know… Jane Doe (Johanna Stanton) has awoken in a dark room of desires and consequences. She doesn’t know how she got here. Surely it was drugs, it had to be drugs to belong in such a surreal existence. There are other people down here in the darkness. No Eyes (Katie Kensit) she’s oblivious to what is going on. Pure Innocence (Hayden Tweedie) is still here but just barely. Husband (Matthew Tompkins) and Wife (Debbie Rochon) made sure of that. There’s a knock at the door but they tell me not to let anyone in. If I can't let anyone in, how will I ever get out? I’ve gotta wake up, the clocks keep spinning...

Doom Room is mind binding, sensual, psychological horror from the demented mind of Jon Keeyes. All is revealed in the end but the journey there is like an acid trip through a night club. Like Alice in Wonderland, a woman awakes with no memory of where she is or how she got there. She awakes to the most maddening of riddles. The answers truly are horrifying. In this wonderland there are no happy endings, only "terror from all sides".

Nipples out, Debbie Rochon gives her most demented and enjoyable performance I’ve seen to date. Her counterpart Matthew Tompkins is equally as sickening. Johanna Stanton covers a duel character, both scared, investigative protagonist and weak, wretch, victim. There’s not a character that’s not memorable, there’s not a detail in the background that doesn’t stand out. Doom Room is a modern day psychological horror masterpiece. It's as disorienting as Alice was in wonderland. It’s the movie I’d expect Hitchcock to produce if he was born in this age. I am proud to make Doom Room the first film I review in 2019 because I think it’ll be a top 10 film by years end. Definitely one horror fans shouldn't miss.