Review of "Crossbreed” by The Headless Critic 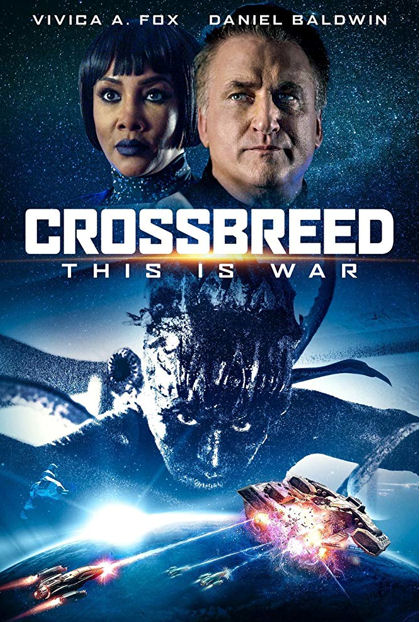 The year 2029 was the start of World War 3. By 2036, the superpowers had collapsed and there was a rise of The New World Order. In 2060 intergalactic trade began. Humans inhabiting space caused tension to grow with an alien species known as the Sharak Ti.

The President of The New United States of America, Ellen Henricksen (Vivica A. Fox) has her secretary of Defense Weather (Daniel Baldwin) hire the top ex-military boss Adam Ryker (Stink Fisher) to put together a small team to retrieve an alien bio-weapon from a research facility orbiting Earth. The team of mercenaries codename's Slaughterhouse (Antoine Lanier), Degenerate (Jason McNeil), Four-Eyes (John T. Woods) and Noob (Brandyn T. Williams) were told it was a simple in and out mission, “a snatch and grab”. An easy ten million credits. They were told wrong.

Director and co-writer Brandon Slagle brings back the movie that says, “it’s just a flesh wound” that we all thought we left behind in the 1980’s. Updated with CGI blood and space ships that don’t look quite right but still somehow look surprisingly good. This is the movie that’s more concerned with showing off their futuristic technology than writing believable conversation. There’s so much wrong in this film I don’t know how I had fun but I did get a certain level of enjoyment out of the kid playing with his toys storytelling.

Two comically uptight roles for veteran name actors Daniel Baldwin and Vivica A. Fox are offset by a good cameo appearance from Mad Max vet Vernon Wells. Our group of mercenaries try to be a little too comical but still make the movie fun. Sci-Fi enthusiasts who don’t mind a bad setting and simplified storytelling may enjoy this sci-fi thriller but I think the 80’s action movie fans who miss characters like the commandos from Predator, even in vein of good storytelling will be the real audience here.