Review of "Blood Bound” by The Headless Critic 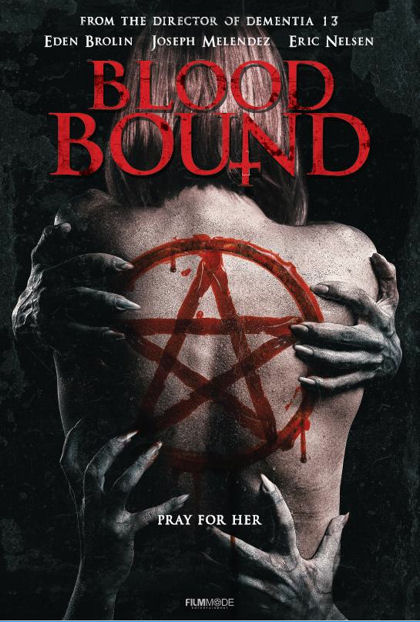 Eighteen year old virgin, Kerry (Eden Brolin) is kidnapped, raped in front of her boyfriend Sean (Eric Nelsen) and impregnated as part of this quarter century ritual to keep a family in power. A family’s ancient pact revisits them every twenty-five years. This powerful family must sacrifice four human lives every twenty-five years including one of their own. If they don’t, they die. Instead of killing an existing adult member of the family, a ritualistic rape is performed to impregnate a virgin, creating a new life to sacrifice.

A rift in the family is created when the chosen rapist David (Ross Wellinger) develops feelings for his victim Kerry who’s the only woman outside his family he’s ever had sex with. A solemn sacrament of dark magic and occult rituals holds one girl’s life hostage. Her only savior is her rapist who would have to sacrifice all, including himself for her life and the life of their chosen child.

“I for one am not about to have my heart ripped out and eaten because you want a girlfriend.”

A love story in the weirdest way. What do you do when your rapist starts trying to date you? Or you find out that the only time you’ve had sex has led to an unborn child your baby’s father wants to kill? This is where eighteen year old Kerry finds her spiraling life. A film from writer and director Richard LeMay could have easily been a statement for the stressful life of teenage angst. Instead it comes off as more of a rapey Twilight.

“Have you ever been in love? That’s a shame, you’re very handsome.”

A seemingly immortal family that never ages and looks good forever wields unlimited power that’s only stopped by not fulfilling their cursed ritual. It’s definitely made well. It’s dark, it’s brooding, it’s full of attractive guys with just the right amount of facial hair. It’s just a little bit too much of a teenage romance story full of beautiful people for my personal taste. I feel marketing may have missed out by not reflecting it as such. For tween girls from 2008 this darker updated version of a Twilight telling is more adult dealing with the occult and may be something you like better. Especially if you like men with beards. Eden Brolin even does her best withdrawn Kristin Stewart impression. "Pray for her."