Watching Movies - An Hour to Kill

Review of "An Hour to Kill” by The Headless Critic 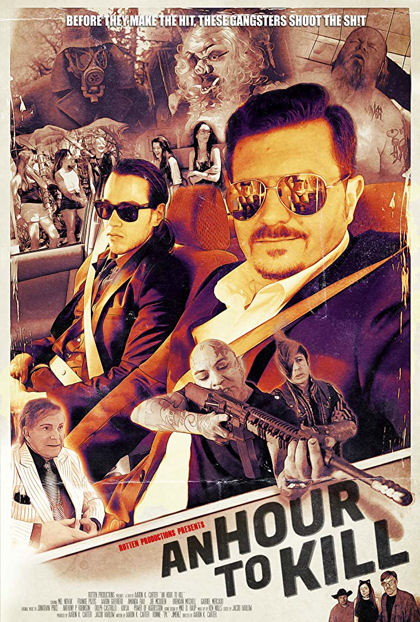 Two assassins have an hour to kill before their next assignment, no pun intended. “Before they make the hit, these gangsters shoot the shit.” Shooting the shit before they shoot their next mark, veteran hitman Gio (Aaron Guerrero) and his unrefined new partner Frankie (Frankie Pozos) help pass the time by telling each other more and more ludicrous tales. These are the stories from the mind of a hitman…

Valkyrie’s Bunker:
“I heard that Hitler’s birthday is 4/20, cool day to be born on.” A boring summer in 1981, five girls, Jenna (Amanda Rau), Heidi (Stephanie Strehlow), Denise (Alexya Garcia), Joyce (Sarah Cordy) and Aida (Jola Cora) go looking for a marijuana patch but things don’t go exactly as planned. At the end of World War II, the Nazi’s built a hidden bunker in the most unlikely of places, America. One of their faithful still remains there hidden, waiting to shed the impure blood of American scum who cross his path. Sieg Heil!

Assacre:
Competitive eating is one of the most gluttonous acts of humanity. Finishing Jeff’s Burrito challenge was only the beginning for Jake O’Toole (Brian Reagan). After getting defeated, sore losers Brendan (Brendan Mitchell) and Gabriel (Gabriel Mercado) sell competition winner Jake “I Got the Munchies” O’Toole what they claim is the hottest pepper in the world. There’s a reason this pepper is illegal.

Hog Hunters:
(Michael Camp), Beast (Kevin C. Beardsley) and mean fuck Chuck (Chris Morris) are three bowling buddies bonding with their newest addition to the team Lenny (Joe McQueen) over beers and babes at a local bar. When these wolves hear of a local place called the Trough where a bunch of women weighing over four hundred pounds are supposed to reside, they decide to go hog hunting. When you hear banjos in these backwoods you’ll be wishing it was just another hillbilly knocking at your backdoor.

Do you remember the scene in Pulp Fiction when Jules and Vincent arrive a little early to their next hit so they take a walk down the hall to finish their conversation about giving a foot massage? This is what would have happened if they had an hour to kill. Aaron K. Carter brings us three shorts with a lengthy wrap-around in this anthology action, horror, comedy. It’s a brilliant idea for new filmmakers to give their shorts the feature film exposure they deserve and to learn the craft of feature filmmaking through an anthology of short films.

There’s a certain charm in the filmmaking with friends aspect of this hour to kill but rest assured it is amateur filmmaking on a budget. Production values are low, performances are limited but the fun in filmmaking can be seen on screen. There’s no Samuel L. Jackson roles nor well written monologues to be performed. There is a very Tommy Wiseau performance from Vince Kelvin (Vince) though. Attempts at quick wit dialogue are mostly lost to realism. Humor is that of a fart joke with a literal bloody fart joke on screen death that lasts for two straight minutes. Not my sense of humor. The foundation is solid in what it takes to make a good movie which most new filmmakers lack. The experience level and execution is still being found.