Review of "The Prodigy” by The Headless Critic 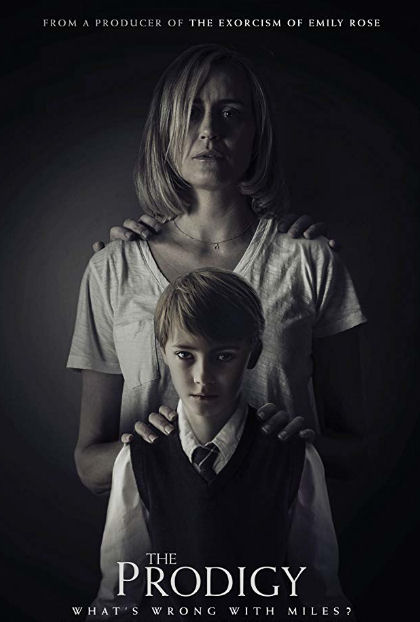 Just like eyes of a different color within the same body so can there be two personalities living as one. Notorious Ohio serial killer Edward Scarka (Paul Fauteux) had his last victim Margaret St. James (Brittany Allen) escape while he wasn’t watching. When police arrived Edward sacrificed his own life at the tips of their bullets. Fifteen minutes later Miles (Jackson Robert Scott) was born to Sarah (Taylor Schilling) and John (Peter Mooney). “There’s something wrong with Miles.”

Eight years later Miles has been found to have a genius level I.Q. Disturbing behavior has been increasingly exhibited from the child manifesting in violent outbursts. “What’s Wrong with Miles?” Well he isn’t Miles at all anymore is he? Looking to save her child Sarah will do anything even sacrifice her own marriage to save her son. Some sacrifices are too great to ask though. Some sacrifices will cost you everything.

Brought to a wide release in theaters hoping to capitalize a little too late on the success of Taylor Schilling of Orange is the New Black fame, the Jeff Buhler pinned, Nicholas McCarthy directed The Prodigy is released with a familiar title, this isn’t the only movie titled Prodigy in recent memory, a familiar concept of a possessed child and a generic cover that makes sure to get Ms. Schilling’s face out there. I’m notoriously hard on wide released horror movies because there are so many great independent horror films with mass appeal that struggle to get released and find audiences. The Prodigy is good enough to deserve a wide release.

The hardest part of any evil child movie is making an adorable young kid scary. Miles isn’t exactly built to a level of creepiness of a demonic Damien or Regan but young Jackson Robert Scott transitions well from vulnerable child to a sinister eight year old who can do jaw dropping things with what he finds on a toilet seat. The film includes some impressive supporting roles from Colm Feore and Brittany Allen. Peter Mooney gets lost in a throwaway father character that seemed to be more of an afterthought in the script to allow Taylor Schilling to take center stage battling maternal instinct.

The mistake most wide released films commit in modern movies is feeling they have to have jump scares to attract audiences. The Prodigy starts off as psychological horror setting a pace for a much more in depth film. It dwindles into more simplistic jump scares. Some are very good including scenes of an older man’s face on the young boy’s body and Miles running to his mother only to turn into an adult man by the time he reaches her which is given away in the trailer. The end of the film literally unravels, taking a mother’s decision to save or sacrifice her son too light-hearted in a predictable ending that should have meant more.