Streaming Review of "The Country Bears” by The Headless Critic 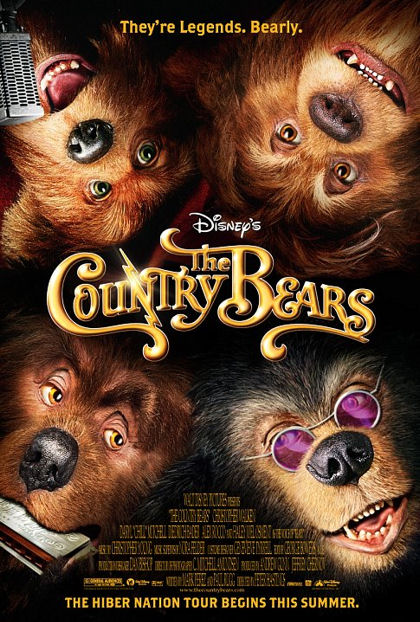 Beary Barrington (Haley Joel Osment) was like any other boy, except he wasn’t a boy at all. When Beary finds out he’s adopted, and also a bear, he no longer feels at home living amongst the humans he loves. There’s a calling inside him to play music. Something is calling him home to Country Bear Hall. Some of the greatest musicians to ever walk the earth have played the Country Bear Hall but none were greater than The Country Bears. Now six years and twenty-thousand dollars behind on their mortgage this historic music hall is about to be torn down. A runaway young cub is about to breathe new life into some old bears. It’s time to get the band back together. “They’re legends, but Bearly.” Ted Berrerhead (Diedrich Bader), Fred Bedderhead (Brad Garrett), Trixie St. Claire (Candy Ford), Tennessee O’Neal (Toby Huss), Big Al (James Gammon) and Zeb Zoober (Stephen Root) reunite to put on a comeback show to try and save the hall they all call their musical home.

“It's A Bear Getting The Family Together!” Based on the over forty year old Disney attraction The Country Bear Jamboree, The Country Bears bring Jim Henson animation alive in bear suites. Much like a Muppet movie Disney brings in a parade of stars including Elton John, Willie Nelson, Christopher Walken, Brad Garrett, Queen Latifah, Stephen Tobolowsky, Wyclef Jean, Don Henley, Xzibit, Stephen Root, Bonnie Raitt and Elizabeth Dailey just to name a few. The biggest star of all is Jim Henson’s animation studio who provide individual character to a bunch of bears.

Made for children an adult reviewing of The Country Bears is biased. Even more so for a horror critic. Though some adults who've visited Disneyland have never seen anything more terrifying than the animatronic, singing and dancing Country Bears. This is a movie you can watch with your kids and enjoy on some level. Beary Barrington is cute and rocks out as well as Howard the Duck did in the 80’s. There’s several catchy tunes that may get stuck in your head when the movie is over. Deep voiced actors like Brad Garret and James Gammon fit the bears perfectly. The story is one we’ve seen a hundred times from before in similar movies where the bad guy threatens to take something from the good guys, forcing them to unite once again and save everything before all is lost. It’s a familiar formula because it works and with a movie made from almost nothing, based off of a singing attraction at Disneyland, it’s good enough.