Watching Movies - One Must Fall

Review of "One Must Fall” by The Headless Critic 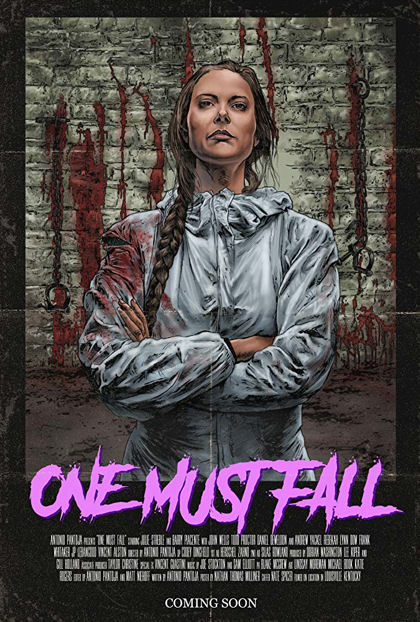 Snead Manufacturing manager Brad (J.P. Lebangood) just wrongfully fired one of his best production workers Sarah Draven (Julie Streble) because she wouldn’t sleep with him. In fact she’d rather suck a fart out of her own ass than be with him. Her gay best friend Alton (Andrew Yackel) got terminated with her just for vengeance. In the middle of buying a house and in need of a job the first place they find that's hiring is for crime scene cleanup.

Her first day on the job Sarah’s first question is when working cleanup on the scene of a violent crime, how do you know the killer is gone? The answer is, you don’t! Crime scene cleanup is a dangerous job as these new hires are about to find out. A killer is on the loose and there’s only one exit to safety. Escape or die a gruesome death trying.

It takes a retro 80’s horror comedy from writer, director Antonio Pantoja to give us a montage of cleaning up a shotgun suicide. The director’s low budget first feature is independent horror fun. It has a sadistic Killer (Barry Piacente) with a lot of toys, practical gore and a high body count, the basics are done right! Rough around the edges, Pantoja is able to create individual characters you care about which is where most slasher movies fail. He does it with off-the-wall, frat boy dialogue I usually despise that somehow works within these characters. It draws you in just to watch them all die horrific deaths.

The gore may be the star of One Must Fall but the office opening introduction to the characters is somehow my favorite part, until that ending... The return to work ending is one of the best I’ve seen in a horror comedy, befitting a movie called Patchwork from a couple of years ago. I won’t spoil it, just say that it takes a lot of guts for a woman to piece herself back together and face oppression. Stick around for the post credits for a little people-pleaser as well.